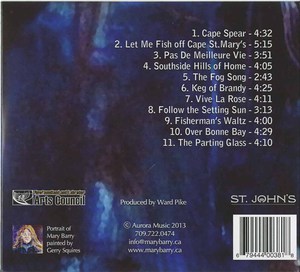 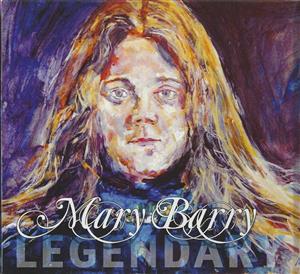 Award-winning singer/songwriter Mary Barry returns with ‘Legendary,’ her fifth full-length recording. Mary Barry has had the idea to name an album “Legendary” in her head for years, although she didn’t know which album or when it would be.

As it turns out, her latest record was begging for the title, for so many different reasons.

Her fifth full-length album, the record — featuring a stunning portrait of the chanteuse by artist Gerry Squires — is a collection of iconic Newfoundland songs and contemporary music, many of them inspired by Barry’s father, Pat Barry, a balladeer who died when Barry was a young girl.

It’s also a dedication to Barry’s mom, Teresa Fitzgibbon Barry, who died earlier this year after an illness.

Barry had just begun the recording process of the album when her mother was brought into palliative care, and she brought a photo of her parents into the studio with her and sang directly to them as she recorded the CD.

As a result, the songs are infused with love and heartbreak that, in some cases, is audible.

“The outpouring of love towards my mother at the end of her life was extraordinary,” Barry said.

“She had touched so many people, who all had a million stories about her and who shared stories that she had told them. I was eyes agog and totally in awe at how, in the end, it was she who was legendary.”

One original song, co-written with Ward Pike, is called “The Southside Hills of Home,” and was an unsuspecting gift from Barry’s mother while she was still alive.

Barry had written the music for the piece and had been intending to record it for the CD as an instrumental, until Pike got a hold of it. Sure they could come up with some suitable lyrics, he asked Barry to tell him about her mother.

“I started to talk about my mom meeting my dad, a redhead from Red Island, and how when they were courting they used to walk along the Southside Hills, back when the Southside Hills had St. Mary’s church. He looked up after I took a sip of water and said, ‘Here’s the first verse, tell me more,’” Barry explained.

“By the time I told him the whole story, the song was written. It was an amazing gift.”

Among the tunes on “Legendary” are “Let Me Fish off Cape St. Mary’s,” “The Parting Glass” — a tune Barry learned this summer in a shed on Fogo Island — and her own interpretation, with accordion and strings, of Ron Hynes’ “Cape Spear,” which also has a back story.

Hynes, staying with Barry in B.C. during a folk festival in 1999, told Barry she should record the tune. He played the song that day while she accompanied him shyly on piano and backup vocals, and she agreed.

“Legendary” also includes the traditional “Vive la rose” and her original “Pas de meilleure vie,” a nod to Barry’s love of the French language and culture.

Barry is a multiple award-winning singer/songwriter who has performed at Montreal’s famed Place des Arts and represented Newfoundland and Labrador on the francophone stage at the 2010 Vancouver Winter Olympics.

She’s a two-time East Coast Music Award nominee and a multiple MusicNL Award winner, and placed in the semi-finals in the 2006 International Songwriting Competition. Barry has graced the stage at jazz festivals from St. John’s to B.C. to Alabama and has appeared at Le festival international de musique de femmes in Paris.
-Tara Bradbury, tbradbury@thetelegram.com
Twitter:tara_bradbury