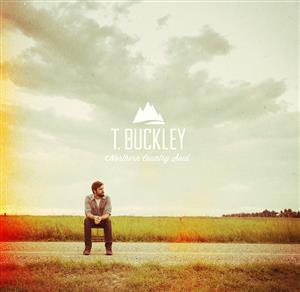 by Gillian Turnbull
Boom. I turned my head for a second, and a new generation of songwriters popped up in Calgary, shockingly professional and prolific, securing weekly residencies at top venues and the best players in town to accompany them.

T. Buckley is one of those songwriters. In a matter of a few years, he has built a solid fan base in the city, toured across the country, and now released his second album, Northern Country Soul. Schooled in Canadian history and emerging from a family of professional musicians, Buckley is well-equipped to write tales of love and longing grounded in the prairies of Alberta. His songs place you, lonesome, in the middle of that barren landscape, your wistfulness thoughtlessly carried away by the winds that rush by. Yet these songs are contradictorily cozy; the camaraderie of a small roots scene like Calgary’s materializing in their sweet harmonies and warm timbres.

Buckley, who holds a weekly gig at one of Calgary’s coolest roots venues, Wine-Ohs, is backed on Northern Country Soul by Derek Pulliam on bass and vocals, and Tim Leacock on guitar, mandolin, and vocals. Leacock, who I think could very well be called Calgary’s best musician, has performed with Beautiful Joe, Tom Phillips, Cam Penner, Dave McCann, Steve Pineo, Ralph Boyd Johnson ... should I go on? ... and is a songwriting force on his own. His contribution here shows that Buckley carefully picked his trio to bring out the nuances of his compositional style, as do Pulliam’s harmonies. They’re rounded out on the disc by Charlie Hase on pedal steel, Jon May on drums, and Scott Duncan on fiddle.

Some good moments: “The Maritimes” is a nice ode to Buckley’s roots, contrasting the pull he feels back there against his connection to Western Canada. Buckley does a great job of situating relationship woes or simple declarations of love within a parallel sentiment for his surroundings, heard here and also in songs like “Gypsy Girl” and “Bitter Winds”. “On a Wire” carefully contains a brewing intensity that threatens to break throughout the song, and gets pulled back – some great instrumentals on this track
read more here: http://www.nodepression.com/profiles/blogs/cd-review-t-buckley-northern-country-soul
buy the album here: https://itunes.apple.com/ca/album/northern-country-soul/id740199932