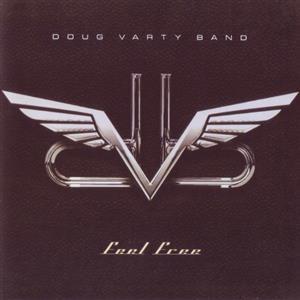 Doug Varty is living proof that rock n’ roll is alive and well. His new album, Feel Free, grabs you from the first note of Kickin’ Ass to the close of Make My Day. It’s straight ahead rock n’ roll that drips with attitude and explodes with energy fueled by his masterful guitar licks. Yes, it’s retro, but it’s fresh, honest, tasteful and true to the genre. And there’s some sweet blues (Feel Free), too. Enjoy. I did.
Joseph John Belanger, Entertainment writer
-London Free Press
London Free Press, December 28, 2011 #6 of Top Ten CDs for 2011 - Doug Varty Band - Feel Free

Doug Varty inhabits a bleakly funny and boisterously funky universe in these songs. There are playful echoes of AC/DC every now and then. Fighting, sex and booze blend into a world where our anti-heroes are often down, but never really out. Varty (vocals, guitars, percussion), Rob Allen (bass) and Dale Penney (drums, percussion, background vocals) are in bruising gear all the way. Among the guests, Big Sugar's Kelly Hoppe's harmonica adds change-of-pace texture on two tracks, one of them the terrific Feel Free (Varty's more humane Maggie May) itself. Since co-producer Bob Breen asked, I think the single ought to be Now You're Talkin.'

INCREDIBLE ENERGY
“Doug Varty has produced a riveting album of Classic Hard Rock’n’ Blues and fans of early AC/DC are going to love it. This album’s loaded with hits – check out "Upsetter", "Kickin’ Ass”, “Feel Free”, “Intoxicated” and "The Itch".
The riffs are catchy, the solos devastating, the rhythm section impeccable and the rock/soul singing heartbreaking. A MUST!! Hey Bon, this one’s for you!”
THOMMY MARTINEZ radiocoteaux, France

“Hi Doug,
I recently purchased this great album Feel Free, I loved it.
I was Impressed, but not surprised. Impressed because it is a great work! NOT surprised because I expected it to be great. Bravo!!!”
John Bell, music lover

“Doug sure can SING and I think the songs are top-notch and the band is TIGHT! Great production as well!” - Sarah Smith, Singer/Songwriter

Hi Doug !
Thanks for the CD.
Your music is like dynamite!
I like it!!!
Thanks very much.
I'm glad to send you my new playlist for the 140th Blues des Canuts Program...

Doug Varty Band - Feel Free
'Feel Free' is the breathtaking hugely enjoyable new ten track album from Ontario's classic based blues rock artists The Doug Varty Band. This album has all the fundamentals I like about classic rock albums that strikes a chord with me for it's rich diversity, fun energy and passion streaming through the music.

A lot of care and attention has gone into the creation of 'Feel Free', especially with the production which is massive, and it baffles me as to why artists like Doug Varty Band are not huge. This record has all the hallmarks that fans of this genre love as it is beautifully performed from all musicians which also includes Rob Allen - Bass and Dale Penney - Drums. DVB are a full on classic rock band of the highest calibre, this rocks bad ass man, if you’re looking for the new breed of classic rock bands, look no further.

'Make My Day' is more bluesy and melodic, this one makes me think of Mr. Big and early Foreigner. It's probably one of my favourite songs. This one is a very catchy classic melodic rocker that will probably smoke live. 'Now You're Talkin' is also very catchy and rocks, like a mix of ZZ Top and Bad Company. I can see radio picking up on this track, very, very catchy and very good playing, maybe even a little Status Quo boogie woogie in there for texture too. 'Paid' is a razor sharp, very melodic and moody song. I really loved this track, the vocals are soulful and the whole vibe is excellent. This is another huge song, just check out that Steven Tyler style screech mid way through, awesome. 'I Wanna Fight About It' is another cool fun rocker in the Bad Company/Mr. Big vein.

Musically it's all here, there is something for everyone to enjoy throughout 'Feel Free' and Doug Varty Band makes you listen and smile, we couldn't ask for more really an this is one of those albums I can play forever and get lost in. Watch out for Doug Varty Band, one to look out for in the future and a band who play with feeling and style, and that’s a rare thing, Europe awaits fellas, well done.

Feel Free is a bit of a departure from Doug's previous recorded work. In this post big-label era of music, there's nobody to try and please but yourself and your audience. So perhaps for the first time, Doug indeed 'felt free' enough to make exactly the kind of record he wanted to make. In this case it is a tongue in cheek nod to Bon Scott era AC/DC, where a cast of misfit characters get themselves into all manner of trouble in the pursuit of a good time - savouring close encounters, innuendo, intoxication, and back alley violence like a delicious meal. This is in fairly stark contrast to Doug himself - loyal husband, proud father, yoga instructor, hard-working gigging musician, and the nicest, most accommodating, soft-spoken and upright guy you'll ever meet. He's also a monster talent which this album demonstrates. He hasn't been edited, auto-tuned or endlessly fixed. This is what he does best... he entertains.

An anomaly these days, the album was entirely recorded to 2" Analog Tape at my studio. The trio of Doug Varty (vocals and guitar), Rob Allen (bass) and Dale Penney (drums) recorded the album playing "live" together, including most of the lead vocals. To add to the energy of the performance, the sessions were broadcast live via the web as the album took shape, and we received comments and encouragement from as far away as Australia while we were recording! It was a novel approach to welcoming an audience into a tight 9x12x7 space. David Crosby once told me "fun hits tape," and I think you can hear that we had some fun. Overdubs, of course, were added later. Doug added guitar parts, almost entirely recorded using vintage Canadian-built Traynor amplifiers at ungodly volumes. Dale and Doug contributed backup vocals and percussion, and Kelly "Mr. Chill" Hoppe from Big Sugar came in to add searing harmonica parts to Upsetter and Feel Free. I added a lead solo and a few subtle textures.

Mixing was a lengthy process as it was the first project recorded at my studio, which I spent three years building to be a no-compromise throwback to bigger rooms where I had worked in Los Angeles. In fact the whole project started as a bit of an experiment to see if the studio even worked! Fortunately, I was able to work in the manner to which I was accustomed. Still, gear and techniques were upgraded several times during the mix process to capture a sound and texture reminiscent of Doug's favourite classic rock albums, which have influenced his writing, singing and playing. Mixes were accomplished entirely by hand from the 2" masters, with touches like real tape echo, but without console automation (much like the latest Foo Fighters' disc). Doug was exceedingly patient while I experimented and remixed to produce a final product which - I think? - sonically rises to the level of the band's blazing top-notch performances. The result, we hope, is a timeless album that updates the immediacy, good humour, and energy of great rock music for an era where too often production and precision is perhaps overvalued. Hopefully you hear it that way too.

Selected credits:
Produced by Doug Varty and Bob Breen.
Recorded and Mixed at the Bunker by Breen, assisted by Dani Breen