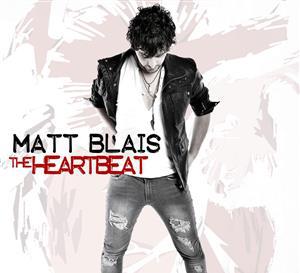 Calgary’s Matt Blais recently released the essential record to unwind throughout the day with, aptly titled, The HeartBeat, which effectively pulsates a balanced blend of blues and rock to temper the angst of life’s daily grind.

His deep, raspy voice and mature sound sets him apart from the techno generation as a storyteller who bares his soul through music and lyrics for the love of his art rather than an entertainer seeking a shot for fame at any cost.

The track, “Running,” illustrates with a lively tempo, the freedom a girl chooses to run with from the frustration of life that hold her down, while the mellower, “(Oh!) What Can I Do,” invites the listener to contemplate the adoption of reality that only so many things handed out in life are controllable, and the rest must just be accepted.

Matt’s laidback style easily appeals to audiences of most genres, though his garbled annunciation through each track might drive anyone mad who prefer to immediately know the basis of a song they’re listening to. Matt’s sultry cry on, “So Far Away,” wins top prize in the category of, “most likely to set on repeat,” for how he draws hearts towards his passion for song’s subject , though, unfortunately, the lack of lyrical clarity leaves confusion as to exactly what the subject is for which he is passionate for.

Mumbled, musical monologues aside, Matt Blais maintains a consistency of upbeat sound throughout the album, capable of chasing away the moody funk so easily crept in to set a mood upright for the remainder of the day.
-Carrie Jo Ashmore, theportalmagazine.com

Produced by Matt Blais
Mixed and mastered by: Johnny Gasparic