Myles, David - In the Nighttime 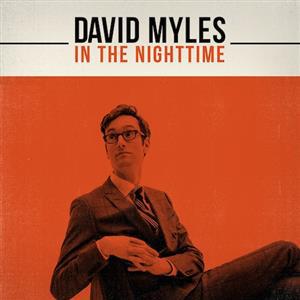 David Myles' new double album, In the Nighttime, is what happens when the two sides of his musical persona - sultry crooner and energetic showman - join forces. Disc One is a full-length album brimming with vintage pop songs and romantic folk ballads. Disc Two is a six song EP of contemporary, beat-laden tracks produced by hip hop artist Classified. One is the soundtrack for your dinner party, while the other gets the dance party started. Each album establishes a different mood, but both are powered by Myles' superior songwriting and smooth vocals.

Myles says: "They are both dream records. The full-length represents the ultimate session with the best live players. The EP was the product of an amazing ongoing collaboration, and I couldn't help but include it. This has been a really creative time, and the double album is a complete picture of where I am right now, musically."

Disc One features Myles' trademark love songs. "What Would I Have To Do" perfectly captures the soaring emotions of unrequited love. Myles sings: "In the nighttime, when you're falling asleep, is there even a chance, that you're thinking of me?" That sense of longing weaves in and out of the collection, reaffirming the songwriter's status as a true romantic. Myles also includes a series of songs inspired by the doo-wop style of the 1950s. "Change My Mind" is a lament for simpler times: "I've never seen any reason to move on, from listening to records and taking the train..." Guest vocalists Rose Cousins and Meaghan Smith complete the journey back in time with picture-perfect "shoo-bee-doo-wah" harmonies.

What makes Disc One so compelling, is that it captures the charisma of a live performance. Myles fine-tuned the material by performing night-after-night during a 35-show tour in Western Canada. Then he and producer Aaron Davis assembled a stellar line-up of musicians (David Piltch on bass, Kevin Breit on guitar, mandolin, and dobro, Davide DiRenzo on drums, and Aaron Davis on piano) to bring the songs to life in a studio-setting. While the playing is extraordinary, it is Myles' voice - at once pure, soulful, and seductive - which really shines, laid bare on a luxurious bed of sound.

Disc Two, nicknamed the After Party, is the latest incarnation of an ongoing collaboration between David and hip hop producer Classified. (a partnership which led to the Juno award winning triple platinum-selling song "Inner Ninja" from Classified's latest self-titled record). In the single, "How'd I Ever Think I Loved You", Myles gives a former lover a failing grade: "You don't like to share, you always interrupt, you never pay attention and you talk too much..." Danceable beats and a pop-infused chorus make the tune irresistibly catchy. While the After Party EP has an urban feel, the tracks echo the sounds of vintage R&B and rock and roll. This is a modern take on The Platters, Frankie Valli and The Four Seasons, and Jackie Wilson.

Somewhere on the spectrum between James Taylor and Justin Timberlake, David Myles has truly forged his own path by embracing modern and vintage pop, folk and soul music. His accomplishments have not gone unnoticed. In 2013, Myles co-hosted the East Coast Music Awards show; an honour preceded by multiple wins, including Songwriter of the Year in 2012. Myles was also in good company at the 2012 SOCAN Awards, where he picked up the Folk/Roots Music prize. With extensive touring experience across Canada and internationally, Myles has earned a reputation as a great showman. His flawless musicianship and unforgettable stories have made David Myles a favourite with fans everywhere.