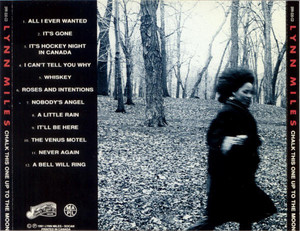 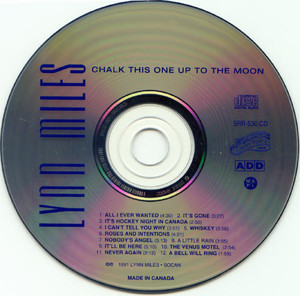 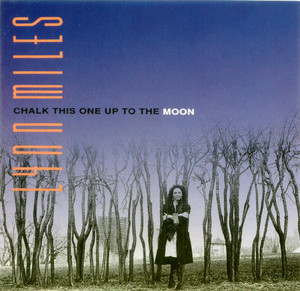 Canadian singer/songwriter Lynn Miles, who is known for her plaintive singing and melancholy muse, is often compared to the likes of Shawn Colvin and Lucinda Williams. The Ottawa native entered Carleton University with the intention of studying music, but soon dropped out to write songs and perform at the bars and coffeehouses of Canada's capital city. She independently released a self-titled debut and Chalk This One Up to the Moon in the early '90s. Her song "Remembrance Day" ended up being featured in a Canadian Armed Forces video that depicted the losses of war and was televised nationally. In 1996, Miles released Slightly Haunted on Philo Records. The effort ended up as a year-end Top Ten pick in Billboard Magazine. (New York Times critic Jon Pareles has also praised Miles' forlorn songcraft.) Miles moved to Los Angeles in 1997 and the following year released Night in a Strange Town. Around that time, she also did a guest vocal on fellow Canadian Fred Eaglesmith's Lipstick, Lies & Gasoline album (on the track "Drinking Too Much"). For 2001's Unravel, Miles reunited with longtime collaborator, guitarist Ian Lefeuvre.
-Erik Hage, All Music Guide

There is something to be said for experience, for taking the time to grow into your own skin. All sturdy things need time to root firmly into the ground to find their strength. But then, everything starts with talent.

Lynn Miles is one of Canada‟s most accomplished singer/songwriters. With ten albums to her credit. The winner of multiple Canadian Folk Music Awards, and a 2003 Juno Award for Roots & Traditional Solo Album of the Year, she has certainly found her strength over time.

Through a career that has seen her move from Ottawa to Los Angeles and back again, with stops in Nashville and Austin, she has always written music with unbridled feelingand vulnerability. Miles has consistently been unflinching in putting herself out there. As we can hear on this re-release of her official debut album.

While her melodies undulate between traditional country and folk roots, it‟s her sensitivity to the world around her, and the human heart, that pours itself directly into Miles‟ music to make it stand out.

Therein is the powerful secret behind Miles‟ music - her astute observations of life, its trials and triumphs, are the hallmark of sincerity in her music. The gritty honesty of her music never falters – neither does her unshakeable ability to make even the most melancholy lyrics sound as if they are brimming with hope and grace.

Lynn Miles is a musician in the rarest sense of the word, an unmistakable talent, an eye for both the subtle and sweet that can only be unearthed with experience.

And while the quotes below refer to later releases, they could just as easily be applied to “Chalk This One Up To The Moon”.

"If it is possible to be addicted in one single hearing, that's how hard I fell for Miles music and voice" Arthur Wood, Maverick Magazine

“Lynn Miles is one of the most acclaimed songwriters to cross the border since Joni Mitchell.” - Dallas Morning News

“Lynn’s music often draws on her love of literature and poetry, but her magic as a songwriter is also in her ability to take life experiences and interpret them in a way that people relate to.” - The Tennessean