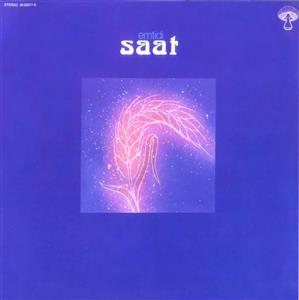 Saat is a little-known gem and Krautrock classic, an album full of dreamy and beautiful melodies. The Emtidi duo considerably expanded its instrumentation and style, and played a unique mix of folk, art rock, and psychedelic music. Besides acoustic guitar, the sound is mainly dominated by synthesizers, mellotron, and other keyboard instruments, which are often played in a classical style. Some softly floating organ parts are comparable to early Tangerine Dream. In contrast stands a song like "Love Time Rain," which could be written by the British folk band Pentangle. On most tracks, Dolly Holmes sings lead with her high, transfigured voice. Aside from "Die Reise," a fairy tale story sung by Maik Hirschfeldt, all the songs have English lyrics. The album has a surprisingly full sound for a duo recording, although no drums were used. Most contemporary German bands played with new styles and sounds, but only a few obtained such wonderful music out of their experiments. ~
-Klaus Kehrle