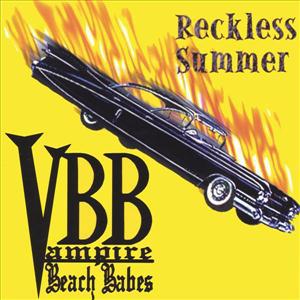 The pioneers of Gothic Surf: One part Ventures, two parts Bauhaus, gently stir in a half can of Adams Family and Munsters, add a 'twist' of The Rocky Horror Picture Show, and bring to Rock-n-Roll boil.

"Gothic Surf-tunes? Vampires on the Beach? What is this world coming to?!"
-Dr. von Helsing

Well get on your bikini and your biker jacket, because summer is just around the corner - and it's never been quite this weird! Yes indeed, sexy vampires have hit the beach (and the stage) and they call them the Vampire Beach Babes. Reliable sources have confirmed as of January the snow boarding set has already been infected, and the downtown fetish club scene has likewise been converted. Health officials are not yet sure of a cure for this rapidly spreading craze, but a certain Dr. von Helsing has suggested silver crosses, wooden stakes and lots of garlic.

At least some of this hysteria can be blamed on the inclusion of the Vampire Beach Babes underground hit 'Gothic Surf-a-rama' on the premier Gothic music compilation 'Gothic Sanctuary'. Such recognition no doubt exacerbated the spread of the Vampire Beach Babes madness. Their December 1st 2000 performance at the Opera House in Toronto was voted as second best performance of the year 2000 (second to VnV Nation and tied with Nine Inch Nails) by Gothic online community Dark Entries (www.dark-entries.com), further accelerating the spread of this scourge. Cover page mention and feature of the Vampire Beach Babes in the widely celebrated horror magazine Rue Morgue did nothing to protect the general public from this menace. Spanking in New Years 2001 with a midnight performance to 500 wanton fetish scene aficionados, at The Big Bop in Toronto, Canada, brought this insanity to a fevered pitch. Then, Halloween 2001 at the Fetish Masquerade and of course the now infamous RCA Records showcase at CBGB's Gallery in New York City! At Toronto's Velvet Underground in February 2002, the TV camera crews of BRAVO and The New Music did their part in documenting this public menace. Furthermore, the president of TROMA Entertainment (the great Lloyd Kaufman) has hand picked the VBB to write the theme song for TROMA's next worldwide release feature film "Tales From The Crapper".

Now, to follow up their critically acclaimed independent release 'Reckless Summer', the Vampire Beach Babes are gearing up for a Summer 2002 CD release of all new material. The world has much to fear!

"Can anything be done to stop this madness?!"
-Dr. von Helsing