Bunny, one of the original members of the Vampire Beach Babes, joined the band in late 1997 with Baron Marcus and founding member, then lead guitarist, Ricky Las Vegas.

After a short break from the band during the ‘Attack of the Killer Bikinis' release, Bunny has become increasingly integrated with the vocal and compositional elements of the VBB.

Legend has it that only she knows the darkest secrets to Baron Marcus' past – and that she, like the Baron, is an ancient soul indeed.

A recent interview with Baron Marcus - some background on the VBB.

1. Where are you all from? Where and when did you all meet?

Where? Oh, sometimes it feels like I'm from another dimension, seriously, you think I'm joking! And as far as 'when', - it sometimes feels like I've been doing this for many millennia. A lifetime ago I grew up at a private boy's school called Lakefield College School. There were some quite remarkable and unusual people that attended at the time. For example, I graduated with Prince Felipe de Borbon (the crown prince of Spain), so my upbringing was quite unusual. Regarding the band members, there have been many people who have come and gone in the VBB. We currently have a three member line-up. It has been up to six members at times, and always members coming and going (and sometimes coming back). Bunny is an original player, joining shortly after the band was formed in 1997. She's been through thick and thin. I forget how we met - strangely, it's like we've known each other for all time. Eris is a very recent member - just over a year. One thing has been common for all members though, is that they have been with the band when it was important for them, and moved on when it was time. There is an overlying theme of destiny when I look back on it. Like the "Oscar Wilde broach" in 'Velvet Goldmine'. Our fans are apparently not immune to the sense of destiny that surrounds the VBB - they all know that if they use a bit of their imagination they are welcome to be a part of it.


2. Some genre combos are like bacon and ice cream, but yours has the Reese's Cup magic. Do you remember the moment or moments when you began to experiment with putting the two sounds together? When did you realize it clicked?

Tee hee - be careful, our sound is always changing. This next album is the most dramatic departure musically and culturally for us. But there has always been a kind of VBB diplomatic immunity when it comes to popular culture. Bowie always had a degree of that - he could be a Glam rocker and a ballad singer and a dance floor diva at will. I have always deeply respected that. Bunny and I were back stage with Peter Murphy at the Phoenix Concert Theatre in Toronto a few years ago, and we had a great conversation about the importance of a broad spectrum of archetype in one's music. By chance, I had the same conversation last year with Alice Cooper on a stop over in Toronto. For Mr. Cooper, he was very clear that his sense of humour always made him more than just a metal band. The freedom to play outside category is very important. That is why I call us (categorically - ha ha) a Gothic-Pop band. 'Gothic' being mystical in inward, and 'Pop' being mirthful and outward (surf for me is a category of pop). That is where the name comes from 'Vampire' (inward mystery) and 'Beach Babes' (outward mirth). Two eternal opposites. The VBB is dedicated to that alchemy - I have always known it.

Now I happen to love peanut butter and chocolate - so I know where you're goin'. You are right, the VBB is about converging polarities. Old Duane Eddy surf guitar hooks vs. new electronic tracks. Trite lyrics vs. their Gnostic or historical references. Serious Gothic mysticism vs. a sense of satirical humour. They are all colliding polarities. The title of our upcoming album (due out in September 2007) embodies this - "Death on the Dancefloor".


3. One thing I've been learning is that different people in Goth culture have all kinds of different attitudes toward what vampires "really" are. Are you guys vampires? What does that mean to you?

As Virginia now knows there is a Santa Claus, we all now know there are Vampires. If mythical archetypes are the universal language of humanity, and if those archetypes are analogy to the fabric of existence itself, it is no wonder that Vampires (like angels, demons and heroes) have been (and continue to be) a popular figure. So blah.

4. You definitely have Goth influences, but you are also making light of Goth sound and Goth style. What is it about Goth culture that makes it ripe for the Vampire Beach Babe treatment?

Many Goths make light of their culture. It is the heritage of a sub-culture so rich in symbolism and history, that it have so many chinks in its black armour. Goth is endearingly hilarious - by its very nature. It is permission to be larger than life. A Goth can eat cheezies and it becomes an event. That is for me, what makes Goth so completely fun and sexy.


5. What is your favorite vampire book (fiction or folklore)? Any favorite movies? When you try for a vampire style, who do you draw inspiration from?

My very favourite vampire book is "Vampires - Encounters with the Undead" by David J. Skal (ISBN: 1-57912-209-4) It is a compilation of historical literature relating to vampires featuring works by Count Alexis Tolstoy, Madame Blavatsky and Sir Arthur Conan Doyle among others. Strangely enough, I have been written into a few vampire novels - as myself. A cameo appearance in White Wolf's 'Vampire the Masquerade' novel "As One Dead" (ISBN-1-56504-875-X), and also written in as a lead character in erotic vampire anthology 'Brothers of the Night' (ISBN-N-1-57344-025-6). Tee hee, Baron Marcus turns to smoke and summons rats and seduces witless townsfolk - it's all great fun! But I must admit that I have a fondness for the fragile complexity of Anne Rice's characters; the romantic vampire, with a dirty vulnerability.


6. Do you have a memory of the first vampire image you saw that stuck with you? What is it about the image of the vampire that makes it so easy to play around with creatively?

Ahh! - it was 'The Hilarious House of Frightenstein', this awesome low budget TV show featuring Billy Van and Vincent Price. I didn't even know what a vampire was - but they looked so cool. They had an impact. Particularly Vincent Price, though not a vampire per se, he exuded that suave creepy cool vibe.

7. What is it about surf music that makes it so damn fun?

Surf music is about flow. The riffs are often self referential - they fold into themselves. The beats often have a syncopation that counterpoints to the self-feeding riff. Bach did a lot of that in the good old days. It's yummy and it makes you want to move. I want that always to be a part of our music.

8. Let's say we're going to reanimate the corpse of Bela Lugosi to ride shotgun and change the CD player, strap some longboards to the car and head out West to catch the monster waves. Obviously we'll pack VBB, but what other tunes must we bring?

Brian Eno - On Some Faraway Beach

Attack of the Killer Bikinis 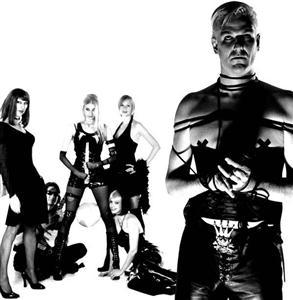