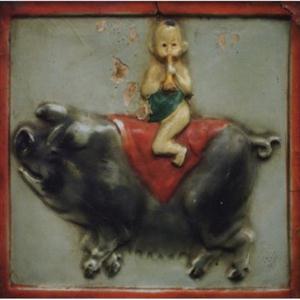 Its hard not to reference his insane list of credits over the past few decades when mentioning Daniel Lanois. The guy has produced some amazing pieces of work in his career. However, it wasnt until I heard Lanois third solo album entitled Shine that I started paying close attention to him. That was in 2003. Since then Ive bought, read, listened to, and watched nearly everything I could find about him. Lanois approach to music and production is extremely inspiring to me, so when I heard about his new project Black Dub, I was eager to hear what was in store.

Black Dub consists of Trixie Whitley (vocals), Brian Blade (drums), Daryl Johnson (Bass) and Daniel Lanois (guitars, vocals, keys). Trixie is the newcomer to the equation, bringing a smoky and soulful belt that you would expect from someone twice her size. Ill admit that Trixies vocals were a bit of an obstacle for me at first. Being a Lanois fan, I wanted to hear him sing. But after a week of listening to this album, Im really drawn in by what she brings to the table.

On bass guitar, Daryl Johnson is as smooth as butter. His tone covers a broad range from deep subby raggae/ dub to vintage Motown tube growl. Pair him up with Brian Blade, one of the greatest drummers alive, and you have one potent rhythm section. Ive never wanted to hear a drummers hi-hat more than Brians. Theres something about the way he hits it and the way Lanois records it that has incredible character. Its not just there to keep time – its part of the story.

And then theres Daniel. His tones and playing are otherworldly, creating huge soundscapes without the use of reverb. Instead, Lanois prefers to use Echo and Modulated Delays to get his unique sonic character. Tricks he picked up from working side by side with Brian Eno Im sure.

Now for the songs. Black Dub takes you on an adventurous ride. Opening with “Love Lives,” I Lanois signature production takes center stage. The intro alone makes me feel like Im listening to 10 years of U2 albums in 20 seconds. He makes mixing a performance, using the mixing desk as an instrument. Hard mutes, ear candy echos dropping in and out – its classic dub mixing. Youll hear these techniques revisited throughout the album.

Next is “I Believe In You.” Trixie dominates on this track with dry, up front vocals matched with a deep groove from Blade and Johnson. Listen closely to Blades hi-hat work and Daryls bass runs. “Ring The Alarm” is next. See accompanying video recorded during a rehearsal last year at Lanois house. Blades drumming on this tune is ferocious and my favorite on the album. Its explosive, but steady. Controlled, yet expressive. Lanois paints a wall of sound with a collage of guitar parts that feel completely separate and disjointed, but all part of the same voice. How he makes this work is beyond me, but I love it. There is a moment at 5:21 where if you close your eyes, youll swear Jimi just walked through the room, put his arms around Daniel and plucked a line or two out on the guitar, then kept on walking. “Last Time” is a reworking of a tune on Lanois last solo album, Here Is What Is that previously featured Blades father covering vocals. On this version Trixie and Daniel take it to a whole new place with her vocal styling and his sonic treatments. “Surely” slows things down with a beautiful soul ballad. Trixie rises to the occasion on this one and delivers a stirring performance. “Nomad” is a deep shuffle that again highlights what a good pair Blade and Johnson can be. Lanois roomy guitar tone on this one makes my arm hair stand up. Silverado features another strong performance from Trixie Whitely. It is also an interesting combination of influences, fusing reggae rhythms, gospel vocals and ambient Lanois guitar textures together.

The last couple of songs on the album are what make this body of work feel like a complete record. While earlier songs like “I Believe In You,” “Ring The Alarm,” and “Surely” will garner the most attention, songs at the end like “Canaan” and “Sing” are perhaps my favorite. “Canaan” features Lanois on lead vocals and reminds me of his early solo work on “Acadie” or even “Shine.” Youll definitely leave this one with the refrain stuck in your head. “Sing” is one of those songs that you could play for just about any music lover and I think they would like it. Its built around a very New Orleans-feeling groove and the group vocals on the chorus take you back to another time. Its a joyous song with lyrics that makes me feel like Im at a revival.

The album closes with an instrumental soundscape called “Sirens” that serves as a great bookend and reinforces the idea of a “record.” Ive listened to this album about fifteen times in the past week and most of the time its front to back with minimal interruption. Like most Lanois productions, Black Dub takes you to different places and the sounds evoke a reaction – sometimes jarring, sometimes soothing. But the fact that it moves you in one way or the other tells me its more than music. Its art. I could go on and on. Just buy the album and catch their tours.
-Shirk