Black Dub generated significant excitement when they released stark, black-and-white videos of their rehearsals and leaked concert footage from a show at Bowery Ballroom in New York. The quartet, comprised of producer Daniel Lanois on guitar and vocals, jazz drummer extraordinaire Brian Blade, session bassist Daryl Johnson, and vocalist/keyboardist Trixie Whitley (daughter of the late great Chris Whitley) make a beguiling, seductive music that blurs rock, soul, blues, gothic Americana, New Orleans funk, and dubwise reggae. The videos portrayed an accomplished group of musicians delivering new originals, a smoking cover of "I'd Rather Go Blind," and a few Lanois' nuggets from older recordings in a bubbling, smoky, passionate yet understated manner. This self-titled debut was mostly written by Lanois save for "Last Time," which is a band composition. Rather than the stark immediacy of the rehearsals, much of this music is draped in Lanois' signature warm, syrupy, murky production; all the edges -- save for those glorious ones in Whitley's voice -- have been rounded off with dense layers of effects and loops. The ballads "I Believe in You," "Surely," "Silverado," and "Nomad" are stellar showcases for Whitley's deeply soulful contralto. She rises above the band and soars, delivering these lyrics as if they are her own; she goes straight to the heart of the listener with that voice, regardless of genre. She stands out here and shines. The mercurial ethereal funk in "Last Time" places Whitley's and Lanois' vocals opposite those of guest Brady Blade, Sr.'s in a weave of bluesy, swampy, narcotic funk. "Ring the Alarm," one of the album's few straight-out rockers, suffers from production excesses: check the video version, this one pales in comparison. The two instrumentals here, "Slow Baby" and "Sirens," are pleasant enough, but seem more like ideas edited from jam sessions rather than full-fledged ones. Still, for a debut, Black Dub is compelling; it gives up its secrets only with repeated listening. There is plenty to move forward with, and hopefully, the band's next project builds upon all that's right here. Suggestion: more Trixie next time!
-Allmusic 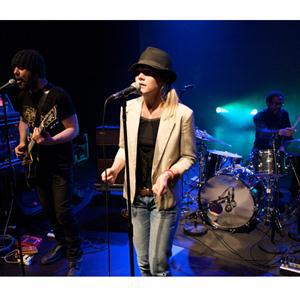