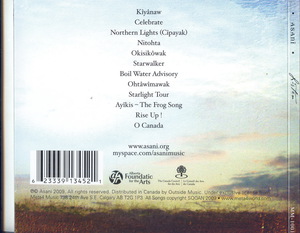 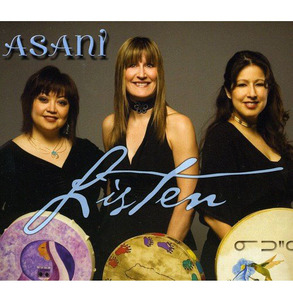 They’ve performed at Carnegie Hall and the Kennedy Centre; they’ve been nominated for 11 music awards, including a Juno; and now Aboriginal Canada’s answer to Sweet Honey in the Rock has teamed up with Frank Zappa’s long-time percussionist, Ed Mann, to create an unforgettable sophomore album.

Asani (pronounced “US-sun-nee”), the angelic-sounding three-woman chorus from Edmonton, will be touring next month to promote the release of Listen, a stunning collaboration with Mann and Cape Breton Drum Festival founder Bruce Aitken.

Possessed of Sweet Honey’s ability to lift spirits, celebrate their culture, confront racism, press for change and unite people of all backgrounds with their joyful energy and breathtaking harmonies, Asani smashes stereotypes about “Aboriginal music” and makes music that is just plain moving by any measure. Their sophisticated quasi-a cappella arrangements feature soaring crescendos, intricate harmonies, and their own take on traditional-style throat singing and vocalization. The percussion on Listen combines Cree drums and rattles with tablas, congas, marimbas, and a host of other “world” instruments. The original compositions, in Cree and English, address issues like poverty and environmental degradation, while also expounding on the importance of community and the need for people of all nations to recognize their connectedness. Plus, the repertoire includes a delightful cover of Buffy Sainte-Marie’s “Starwalker” and a unique trilingual (English/French/Cree) rendition of “Oh Canada” – which has become a signature number for the group in performance.

Asani’s sound is a product of its members’ extensive musical training and deep connections to their Cree Metis heritage. Sarah Pocklington has a B.A. in English/Anthropology and a Masters Degree in Native Studies and is currently working towards a PhD in Education Policy Studies, with a focus on contemporary Aboriginal music. She is also a graduate of the vocal program at Grant MacEwan Community College, and she has taken courses in dance, drama and percussion. Sherryl Sewepagaham, from the Little Red River Cree Nation, began singing at a young age and went on to study classical voice and piano at the Alberta College Conservatory of Music in Edmonton and at Douglas College in New Westminster, BC. She has a Bachelor of Education degree in Elementary Music and is currently an elementary music teacher and conductor of the Aboriginal children’s choir, Awasisak Nikamowak. Debbie Houle, of the Elizabeth Metis settlement, has been singing since the age of five and studied voice at Grant MacEwan Community College. Debbie currently works with the Edmonton Winter Light Festival and is a community coordinator with the Wicihitowin Circle of Shared Responsibility & Stewardship.

The original members of Asani met through an Aboriginal choir at Grant MacEwan College and decided to pursue the music more seriously. One of its early incarnations was invited to perform at a choral concert at Carnegie Hall. Asani’s membership was formalized in 2001, and their career took off when their music was featured in the Opening Ceremonies of the World Championships in Athletics. Their debut album, Rattle and Drum, was released in 2005, and received nominations for the Juno Award for Aboriginal Recording of the Year and the Western Canadian Music Award for Outstanding Aboriginal Recording. It also earned the group a Canadian Aboriginal Music Award for Best Female Traditional Cultural/Roots Album. In addition, Asani received three Aboriginal People’s Choice Award nominations, three additional Canadian Aboriginal Music Award nominations, two Indian Summer Music Award nominations and a Native American Music Award nomination. The trio has performed for Queen Elizabeth, played the Smithsonian Folklife Festival in Washington DC, and appeared at countless other festivals and Aboriginal celebrations. It has also composed music for documentary, film and television. This tour marks the group’s first real tour of Ontario, and they are thrilled to be getting a chance to perform for so many new audiences with the new album in tow.

The women of Asani bring to their work a unique combination of contemporary musical training and a reverence for Aboriginal tradition – which often sees them consulting with elders and sharing musical ideas orally rather than in written form. The project not only helps keep their language and culture alive, but it continues to serve as a vehicle for the members themselves to learn more of it.

Best of all, Asani makes Aboriginal music and culture accessible to people of all backgrounds thanks to their gorgeous vocal arrangements and song-writing skills that are first rate by any standard. Listen is indeed an album everyone will want to listen to again and again.