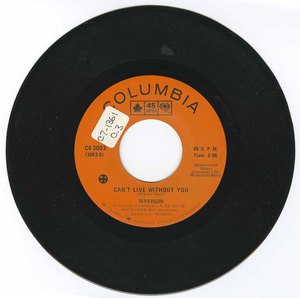 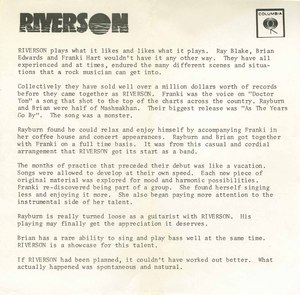 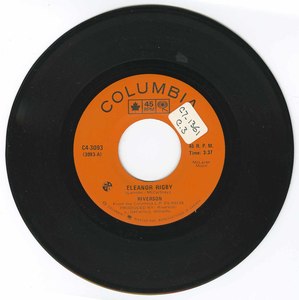 from 1973-Promo insert:
Riverson plays what it like and likes what it plays. Ray Blake, Brian Edwards and Franki Hart wouldn't have it any other way. They have all experienced and at times, endured the many different scenes and situations that a rock musician can get into.

Collectively they have sold well over a million dollars worth of records before they came together as Riverson. Franki was the voice on "Doctor Tom", a song that shot to the top of the charts across the country. Rayburn and Brian were half of Mashmakhan. Their biggest release was "As The Years Go By". The song was a monster.

Rayburn found he could relax and enjoy himself by accompanying Franki in her coffee house and concert appearances. Rayburn and Brian got together with Franki on a full time basis. It was from this casual and cordial arrangement that Riverson got its start as a band.

The months of practice that preceded their debut was like a vacation. Songs were allowed to develop at their own speed. Each new piece of original material was explored for mood and harmonic possibilities. Franki re-discovered being part of a group. She found herself singing less and enjoying it more. She also began paying more attention to the instrumental side of her talent.

Rayburn is really turned loose as a guitarist with Riverson. His playing may finally get the appreciation it deserves.

Brian has a rare ability to sing and play well at the same time. Riverson is a showcase for this talent.

If Riverson had been planned, it couldn't have worked out better. What actually happened was spontaneous and natural.