Blais, Matt - Let It Out 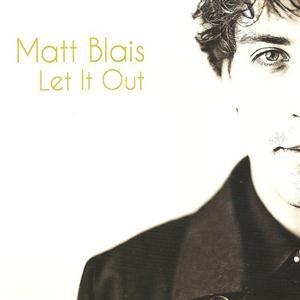 In the entertainment industry, it has become all too common to replace one’s given name with an alluring alias. One artist who is in no need of a sizzling pseudonym is Calgary native Matt Blais. Blais has one of those names that is tailor-made to be lit up on a rock ‘n’ roll marquee as it rolls smoothly off your tongue and sticks in your head, much like he anticipates his latest tunes will. As he gears up to release his first full-length album, this is one musician who is ready to set the local scene ablaze.

“It’s going to be called Let It Out. I thought it was appropriate. I don’t know how other people write songs, but I try to hold in a song as long as I can and I won’t put it down on paper until it has to come out. I’m also a huge fan of Feist and hers is Let it Die. There is a lot of good ‘Let It…’ records and I hope this makes the rank or at least comes close.”

Just how did Blais begin his musical career? It is a whale of a tale – a whale named Willy, to be exact. Combine the rebellious harmonica-playing attitude found in the ‘90s film with a little Bob Dylan and you have the starting point to Blais as we know him today.

“My very first musical instrument was a harmonica and it was because of the movie Free Willy, one of the best movies of all time. The boy plays the harmonica to the whale and I thought, ‘Who wouldn’t want to speak to a whale?’ So I got a harmonica for my birthday and eventually I picked up an acoustic guitar and I got really into Bob Dylan. I was like, ‘He plays the harmonica and the guitar at the same time. How does he do it at the same time?’ I started putting the guitar on my leg and putting the harmonica on top of the guitar and kind of playing it, trying to make sound. It’s all about experimentation.”

Blais has garnered a reputation over the last few years for his constant touring of Alberta, hitting every rural retreat on the map from Manning all the way to Coaldale.

“For me, it’s all about just playing and getting out of the familiar and going to a new place. That’s the thing, little spots that people don’t know. It takes people minutes to discover something, but it’s worth it.”

Although tiny towns have provided Blais with plenty of interesting road stories, he finds the Calgary scene as a source of boundless inspiration.

“Calgary is so diverse right now; there are so many different bands. I can’t think of two bands that have the same sound right now. I read an article a little while ago talking about why Calgary, geographically, is the way it is and how spread out we are: it’s because we don’t have any physical things that hold us in. We have this vast expanse that we can just kind of populate, so I think that that affects the music. If you don’t like this sound or whatever, you’ve got all the room you need to kind of branch away and create your own thing. In that way, it’s like a spider web; everybody in this city is connected, everybody knows everybody, but everybody is taking a step forward in kind of their own way.”
-Allison Drinnan, Beatroute

...Matt Blais has begun to make a serious charge into the Canadian music scene. In September 2008, competing against hundreds of Canadian bands, Matt was selected as the winner of the monumental Big Rock Star Talent Competition (in which he was awarded studio time, publicity photos, new equipment and tour support) thus launching his music into the hearts and minds of people across the country. Additionally, Matt has been chosen as a Big Rock UNTAPPED Artist in 2009, leading to the inclusion of his song “Beautiful Thing” on fifty thousand CDs distributed across the country in cases of Big Rock Beer, thus essentially reaching Canadian Gold status. Having played professionally for the last seven years, Matt’s list of accomplishments continues to grow. In the last year he has opened for such acts as K-OS, The Dudes, Michael Bernard Fitzgerald and Lindsay Ell. He has also taken the stage at the Stampede Grandstand, Big Valley Jamboree and was included in several events for the 2008 Juno Awards in Calgary. A cutting edge artist, Matt Blais combines elements of fiery rock and roll with smooth vintage soul to form a sound so uniquely his own that one can’t help but become emotionally charged. The combination of a stellar live show and a passion for songwriting is Blais’ formula for success, which thus far has been very well received by critics and the audiences that continue to grow in number. His debut record, “Let It Out” is produced by Juno nominated all-star Canadian producer Mark Howard whose discography reads like a veritable who’s who of the world’s finest musical talents. This includes artists such as Bob Dylan, U2, The Tragically Hip, Sam Roberts, Avril Lavigne, Daniel Lanois and the Red Hot Chili Peppers, to name a few. The album also features a star-studded cast of live & studio musicians including Doug Pettibone, Daryl Johnson, Steven Nistor and David Kalish. Recorded at the renowned “Sonora Recorders” in Los Angeles and “Music Centre Canada Studio” in Calgary, Matt Blais’ debut album is a fusion of diverse influences, sounding more like a journey than just another rock record.