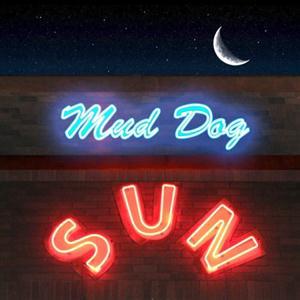 My first introduction to Mud Dog was via their 2008 release "River of My Soul", for which I wrote in part of my review for that album, "With it's amazing vocals, harmony, and a more then generous helping of harmonica, "River of My Soul", takes you on a gentler journey of the Blues, one which will leave you with a genuine feeling that you are listening to something refreshing and new." The release of "River Of My Soul" saw it winning the Toronto Exclusive Magazine Award for Best Canadian Blues CD/Album for the 2008, being nominated for Outstanding Blues Recording at the 2008 Western Canadian Music Awards, and placing #5 on my Blues Underground Network's "Top 10 Blues CD Releases for 2008". Now with the release of "Sun", we all get a chance to hear why Mud Dog has received and continues to receive rave reviews for their music and their shows.

"Sun" consists of 10 Tracks, which are all originals written and produced by Steve Sainas (Vocals/Dobro/Acoustic Guitar). Accompanying Steve on "Sun" is Christopher Allen (Harmonica/Harmony Vocals), the second half of the Mud Dog Duo. Together, these two extremely talented Vancouver, Canada based musicians bring us the Blues the way they are meant to be heard, Raw and Real.

The title of the album comes from the fact that "While competing at the 2011 International Blues Challenge in Memphis, Tennessee", they took the time and opportunity to record at the legendary Sun Studio, which took place on January 31st and February 2nd of 2011. To add to it's authenticity of pureness, the recording of all ten songs was done Live off the floor. The songs chosen for this project were not new songs, but songs from their two previous releases, "River of My Soul" (2008) and "Devil's Ride" (2003), four of which came from "Devil's Ride" and remaining six from "River of My Soul". Re working those songs, with making some a little longer and some a little shorter, and all of them a bit more rawer, with more live acoustical, harmonica, and vocal nature, was certainly a treat for me, especially with getting to hear some of the tracks from their first album that I had not heard before. You could say that "Sun" is essentially a Best of Album and a Live Album, all in one, but with a newer more refreshing fill, without the Cut and Paste approach that plagues so many Best of Albums. To be honest, I don't think that you could get any truer sense of what it would be like to see this amazing Duo in person then by listening to "Sun".

Mud Dog, once again, has continued to impress me with their amazing talent of bringing great sounding Blues to the forefront. With "Sun", they have once again managed to release an exceptional album of Blues, surely destined to be another one of this years more acclaimed Blues releases.