Steve "Mud Dog" Sainas has been a guitarist/singer/songwriter in Vancouver's cabarets and pubs for the past twenty years. During this time, he has developed a powerful blues guitar and singing style that is instantly recognized by his steadily growing audience. In 1997, Steve began to lay the groundwork for forming his powerful blues band Mud Dog. His vision was to pay tribute to blues masters such as Robert Johnson, Muddy Waters, Howlin' Wolf and John Lee Hooker with a fiery contemporary blues sound. However, Sainas has evolved into an inspired songwriter and producer testifying his own life experiences through his songs that echo the sounds of the Mississippi Delta. In March 2003, Mud Dog released its debut CD "Devil's Ride" at the Terry Fox Theatre to a house full of excited fans. "Devil's Ride" features eleven original songs written and produced by Sainas, as well as two traditional arrangements. The CD is receiving regular airplay coast to coast. Five years later, Mud Dog released their second CD “River of My Soul” that features eleven new original acoustic songs written and produced by Sainas. Fans and reviewers describe “River of My Soul” as Mud Dog’s best CD so far.

"River of My Soul", takes you on a gentler journey of the Blues, one which will leave you with a genuine feeling that you are listening to something refreshing and new… "River of My Soul" is a must have CD for any fan of the Blues.
~ John Vermilyea (Blues Underground Network)

During the day, Steve is busy teaching Rock School and Recording Arts at Terry Fox Secondary School in Port Coquitlam, BC. He established these programs in 2000/2001 and has developed them into one of the most successful music programs in public education.

Christopher “Reed Killer” Allen is an award winning harmonica/vocal virtuoso who has performed and recorded all over the continent with a host of musical greats including Kenny "Blues Boss" Wayne, Esther Phillips, Ronnie Hawkins, Tina Turner, Jeff Healey, Bob Rock, and David Foster. Each night Christopher stuns the audience with his soaring melodies and amazing harmonica acrobatics.
Together, Steve And Christopher dig deep into roots blues creating a fresh contemporary acoustic sound that is thick with energy and flowing chemistry. The combination of harmony vocals, harmonica, acoustic guitar and steel dobro brings out the very essence of the original blues sounds of the Mississippi Delta.

Steve and Christopher were honoured to have been selected by the White Rock Blues Society to represent British Columbia, Canada at the 27th Annual International Blues Challenge in Memphis, Tennessee. In February 2011, they competed in the solo/duo blues category with 83 of the best blues acts in the world. While in Memphis, Steve and Christopher recorded ten original acoustic songs live off the floor at legendary Sun Studio. These recordings capture the raw energy of the duo's live performances. Mud Dog ~ "Sun" was released on July 8th, 2011 and is now avaiable to order or download on CD Baby and iTunes.

"Sun" is essentially a Best of Album and a Live Album, all in one, but with a newer more refreshing fill, without the Cut and Paste approach that plagues so many Best of Albums. To be honest, I don't think that you could get any truer sense of what it would be like to see this amazing Duo in person than by listening to "Sun". Mud Dog, once again, has continued to impress me with their amazing talent of bringing great sounding Blues to the forefront. With "Sun", they have once again managed to release an exceptional album of Blues, surely destined to be another one of this years more acclaimed Blues releases. "Sun" gets my highest rating of 5*****, with no problem at all. Highly Recommended and Thoroughly Enjoyed...
Review by John Vermilyea (Blues Underground Network)

In dance venues and in the studio, a dynamic rhythm section joins Steve and Christopher. Rodney Koke (bass/vocals) and Mark Rosen (drums) infuse Mud Dog with a pounding heartbeat that ignites the audience into a dancing frenzy.

River of My Soul 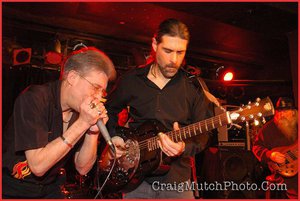 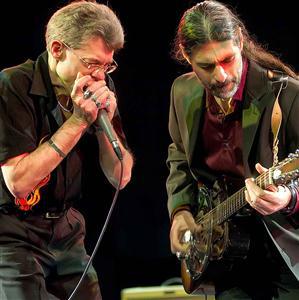