British Columbians - Made for Darker Things 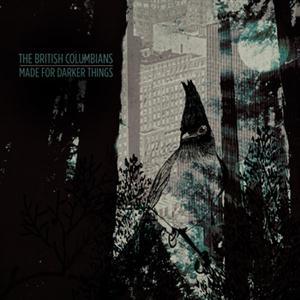 Vancouver area-based quartet The British Columbians are a breath of fresh air. While their music is an incomparably unique union of very diverse backgrounds that results in a mixture of old school blues-influenced stompy rock ‘n’ roll songs (heavy emphasis on the roll), with songs that are haunted, wooden and pastoral, one must understand how their outlook and passion fuels this creativity and originality. It is their grassroots approach to making music for music’s sake that is seeing them blossom as one of Canada’s few truly authentic acts.

“We’re passionate about there being integrity in music,” states Moran matter-of-factly. “I feel like if you have a gift to play music, you should use it and it should be sincere. Those are the bands that we gravitate towards and love: the ones who are genuine. And the first time you hear those bands, you connect with them.”

For The British Columbians, those connections have been coming fast and strong thanks to their heartfelt devotion to music and unwavering intent on delivering trustworthy art devoid of needless pomp and circumstance. In fact, it has resulted in a powerful independent eponymous debut that is grabbing the ears of our nation’s most prominent music fans. The British Columbians have been voted Canada’s Best Undiscovered Band by a top mentor board for the Zune Concert Series Competition comprised of representative from the likes of Dine Alone Records, Explore Music, Last Gang Records, Universal and Roadrunner Records respectively. Not to mention successful cross-country tours and select dates on renowned festivals including NXNE and V-Fest, sharing the stage with Band of Skulls, K-OS and Broken Social Scene to name a few.

They are also quickly amassing astonishing amounts of radio play at Canada’s top stations, a direct reward for their hard work and musical sincerity. Not bad for two men who met while working in a music store and became fast friends due to similar interests and perspectives on music. Notes Knox, “We got together to make some music…just playing around without any big ambition. The chemistry was there at the first moment and we both thought this was something special.”
“It was a long process of ideas and collaboration with the album coming after deciding that some songs were together and viable,” adds Moran. “We started working at writing songs and thought we’d make a record, not really planning on where to take it. We just knew we wanted to make something we felt was strong and worthy.”

Strong and worthy it has been. A few months and many jam sessions later, the duo found themselves entering Burnaby, B.C.’s legendary The Hive studio with renowned producer Colin Stewart (Black Mountain, Destroyer, Ladyhawke) to create a self-titled affair that has gripped the world of rudimentary, guttural rock. Bringing in Ellis and Connell to complete the fold, The British Columbians were solidified and the album’s lead singles “Hoodoo” and “In The Leaves” began commanding airplay. Third song “Hail To The Rising Sun” is the new release for The British Columbians who believe their expedient success relies on fortitude, veracity and the intent on being true to the most important aspect of any artist, creativity. “So much of what is contemporary popular music is wallpaper but, still there are artists out there who are motivated to make truly great music, we align ourselves with them,” declares Knox. “This music isn’t for show or a put-on. We’re connected to it.”

“Music should be a reflection of who you are, not an image,” he continues. “We hold that as important to our art. While people might try to compare us to this band or that one, nothing about what we’re making musically is a calculated manoeuvre. It’s about being in touch with the currents that run deeply within. We always try and do what we do with conviction. It comes from an honest and real place: us.”
-aroundinsound.com