The four dudes who comprise the British Columbians sure seem to love living on Canada’s West Coast. Not only did they name their band after our fair province, but they’ve opted to release Made for Darker Things digitally on B.C. Day (August 1). The timing is perfect, since this outing will make an awesomely rocking soundtrack for your holiday barbecue.

The band spends most of these eight songs with its guns blazing and the amps cranked to 10. There’s no shortage of shit-hot guitar workouts and pile-driving rhythms here, and listeners will frequently be reminded of Led Zeppelin at its most stripped-down and primal. “A Fine Mess” is laden with pummelling riffs, whirling organs, and booming group harmonies, while “Broke & Busted” brims with scorching slide licks. As righteously badass as these crunchy tunes are, the real star here is singer Girard Knox, whose dynamic vocals range from a gravel-voiced snarl to a soaring, arena-sized wail.

Despite their affinity for boozy blues rock, the British Columbians are no one-trick pony, and the album’s second half contains a pair of impressive stylistic switch-ups. “The Munitionette” is a psychedelic slow burn that’s soaked with amorphous feedback and features a surprisingly tender trumpet solo. The folksy “Heart on the Wrong Side”, an acoustic campfire ballad, finishes Made for Darker Things on a wistful note. It’s a gorgeous end to an accomplished album that does our province proud.
-Alex Hudson, straight.com 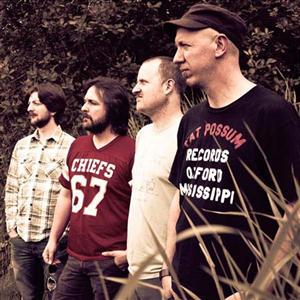