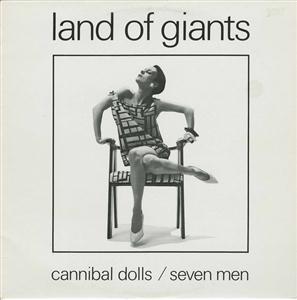 Originally recorded between 1982 and 1985 this CD features the original synthpop, minimal wave 12 inch "indie" single, along with previously unreleased material including a bonus track, land of giants take on the Sonny and Cher classic "I Got You Babe".

In the late spring of 1982 an electro-pop band from Canada calling themselves land of giants released an independent 12" single called Cannibal Dolls / Seven Men. land of giants featured the talents of Henryck Jesiak, John Tucker, Anya Varda and Marc Wonnacott. The single went on to receive respectable radio play on college radio (where it reached #1) and on alternative radio stations. John Peel even played it on his BBC show, according to a friend who phoned me long distance from a call box in the UK the night he heard it. After it’s initial success as a dance floor hit, it has garnered a small but extremely loyal following around the world. Prices for the original 12inch single have reached almost $200US on ebay! All this and land of giants has never played a live gig!

Over the years we have had requests from fans for a CD and for more songs. There were a number of demo recordings made between 1982 and 1985 that were never released. The long awaited land of giants CD, cannibal dolls/seven men is now available!

John Tucker who engineered the original material has painstakingly re mastered the single along with nine other unreleased songs. He has now achieved this to his satisfaction, so order your CD now here: http://www.landofgiants.ca/main.html