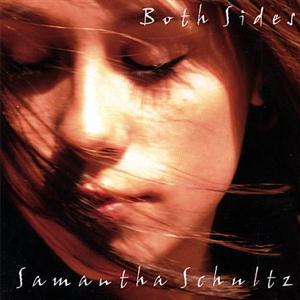 It just doesn't seem fair, as I look from the perspective of nearing 50, that someone should barely be a teenager and have a voice as good as Samantha Schultz. This gal is from Alberta, and was the sage old age of 17 when she recorded her debut disk Both Sides. This is a folk/blues effort, and often someone of 17 trying to get their voice around the blues is a disaster waiting to be heard. With Schultz she handles it like she is a veteran of the genre far beyond her years. It helps that Schultz's voice it more mature than 17 too, which really is essential to carry the blues. While Schultz's voice impresses in its maturity on a cut like The Truth, it's the info in the liner notes which had me doing a total double take with this CD.

The 12 songs here, both lyrics and music, were penned by the artist herself. There are numerous artists that never do get to the point of writing their own material, and that is particularly true in the blues since there is such a vast library of material to draw from. That Schultz was both bold enough, and talented enough, to offer up all original material in her debut, even at her young age, speaks volumes to this performers maturity. As solid as this CD is, I can't help wondering what could come next, or come a decade down the road? Where can Schultz go as she adds life experiences she can draw on to fire her writing? How will an already amazing voice sound with a bit of age added? While those thoughts suggest greatness if Schultz holds the course in the blues/folk she already shows such an affinity for, she is darned good today. This is really an amazing debut from a gal with a voice to remember. Check her out at www.samanthaschultz.com
-Calvin Daniels