Murdoch, James Band - Wondering Where the Rush Has Gone

James Murdoch Band - Wondering Where the Rush Has Gone 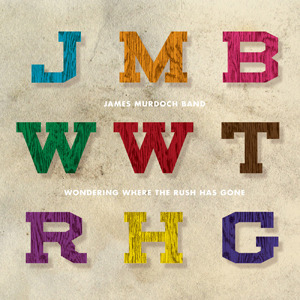 Strong, honest lyrics with solid hooks and catchy sounds - James Murdoch returns triumphantly to revisit the Whitehorse of his youth and show them what he's been up to.

Fresh off the release of his fourth album, Wondering Where the Rush Has Gone, by Shameless Records Canada, James Murdoch Band is riding high and ready to take Whitehorse along with it.

“We're constantly changing, like any professional musician who wants to stay true to their work and keep it fresh,” says Murdoch of the band's current sound.

While he still professes a love of pop (the kind of pop from the likes of the band Wilco, not Lady Gaga), he's eager to see roots take more of a main stage in his act.

He's a local boy who has made it relatively big and counts his youth in Whitehorse as one of the key opportunities that helped him launch his professional music career: “I got my start playing in a punk band, of all things. We played anywhere and everywhere, and that really got me going,” says Murdoch.

“It's constantly a challenge, but it's one I accept gladly. Everything is hard when you look at it, and I may as well be doing something like this,” he says.

Despite his successes - four albums under his belt, countless tours, 10 years in professional music and another seven with music and performing in general - Murdoch remains humble. “There are many who haven't gotten as lucky, who are just as talented musicians as I am.

“I lucked out, and I'm extremely appreciative for all of these chances to perform,” he says.

One of his albums, 2007's In Transit, was co-produced by Canadian indie music darling Hawksley Workman. The production with Workman was an experience Murdoch describes as an “interesting and intense process” while they spent an entire summer recording at a cottage in Muskoka.

Despite the grand tours and critically acclaimed albums, Murdoch stays true to his Yukon youth. He recalls fondly playing in Whitehorse in the past, and looks forward to his upcoming Yukon tour to kick back, enjoy the scenery, and play some rocking shows.

Accompanying him on tour are band members and “great, amazing musicians” to whom Murdoch remains grateful to for their strength as performers.

He is joined by guitarist Nathan Carroll, piano and hammond player David Aide, and Chris Budnarchuk on drums.

Murdoch laughs when asked which songs he plans to play to Yukon audiences: “I'm just glad we have enough album material to choose from. I remember days when we barely had enough for a set, and for encores, we'd hope they didn't remember the first track, so we could play it again.”

He kicks off the tour with a show at Coasters on Thursday, July 8, then playing at the Zenadu Music Festival in Marsh Lake July 9 (see the story on this page), wrapping it all up with performances at the venerable old 'Pit' Pub in Dawson, July 11 to 13.