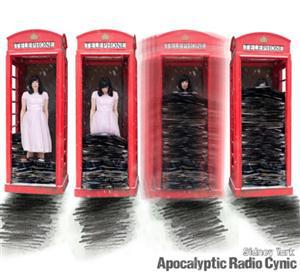 Sidney York may be relatively unknown in the realm of popular music, but just you wait.

With the help of Ryan Guldemond (Mother Mother) on guitars, and partly behind the overall production of the album, as well as the masterful mixing of Howard Redekopp (New Pornographers, Hannah Georgas, Mother Mother) there’s no doubt Apocalyptic Radio Cynic is on the cusp of becoming very well-known in the indie pop circuit, once it’s released on May 24th. But perhaps I’m getting a little ahead of myself, let me back up.

Sidney York, who’s actual name is Brandi Sidoryk, hails from Calgary, Alberta but she’s been spending a lot more time in the epicentre of the Canadian independent music scene, Vancouver, and for good reason. There’s very little argument that Vancouver, and BC in general is home to some of Canada’s greatest independent talent, so Sidney’s appearance out on the great pacific shoreline should come as no surprise.

Sidney has been at this music game for a little while, as she released a self-titled album back in August of 2009 (which I will assume was her official debut), and even released a few music videos in support. The biggest difference you will hear from the Sidney York of 2009 to Sidney York of 2011 is a transformation from a singer/songwriter style of album to an outright quirky, pop-rock songstress. And don’t let my lousy attempts at genre classification dissuade you, because her pop-rocky-ness isn’t the glitz and glam of Katy Perry or Lady Gaga. She’s much less self-indulgent.

Take for example, the fourth track on Apocalyptic Radio Cynic, Mile High Love. York croons over some uptempo percussion and catchy keyboards, and is accompanied by some talk-singing echos of “You get me!”, which reminded me a little of Hannah Georgas‘ Bang Bang You’re Dead. This particular tune is one that could very easily make it onto most radio playlists as it’s a little pop, a little indie, and a little rock.

Just before the aforementioned pop rock goodness of Mile High Love, Sidney shows us a different side of her many musical personalities with Doctor, Doctor. This song is jazzy, sultry and so smokey that after listening to it, my mouth tastes like I’ve been breathing in cigar smoke while sitting in a gentleman’s club and observing the scandalous. The perfect bachelor party tune? Full of innuendo with lines like “Please infect me”, “He tickles my throat” and “Unbandage me”, I’m pretty sure this song isn’t actually about going to the doctor for clinical healing…

Miss York also shows us a bit of her darker, more brooding side with such tracks as Cold In Here and Tea As It Should Be. The former actually being the album opener is a little Mother Mother-esque and one of my favourites on the album. The tracks Math and Fractions and Roll With Me are a unique combination of musical solidity and a dash of fun (as is most of her album). And they will no doubt keep you humming them for the rest of the day.

But the mother of them all, the song that will propel Sidney York to indie pop rock fame is Dick & Jane. It is the album closer. It is the song that introduced me to her and it is a terribly, terribly catchy ditty. Wow, I’m even using the word “ditty”, thanks Sid. This tune’s got me smiling, dancing, whistling, singing, bobbing, weaving and building Lego all at the same time. It is so much fun and so musically satisfying, I’m so glad she saved her best for last. I only wish it was a little longer because at two minutes and nineteen seconds, it’s merely a tease.