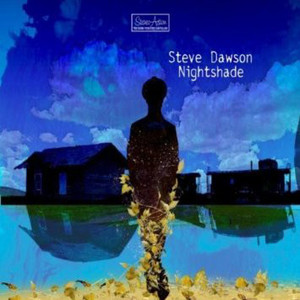 "Over the past decade or so Steve Dawson has become such an indelible fixture on the Canadian musical landscape that it’s tempting to take him for granted. One of the drawbacks of being so talented is that Dawson makes everything he does sound so effortless. The music that continually flows out of him is so natural and unforced that it’s possible to forget all of the toil that went into producing it. Behind the organic, flowing guitar work, the crisp arrangements and the laconic singing voice, resides one of the brightest, hardest working musicians the country has ever produced."

That above statement, which is part of Steve Dawson's biography on his record labels website, could be taken one of two ways. The first way being "Hum, I wonder if that is just the record label hyping up one of it's artists" or the other way is "Wow, that sounds like Steve Dawson's music would be really great to listen to." Well, I have had the good fortune now to listen to the last 3 of his solo albums, which includes his newest release, "Nightshade" and I have also had the good fortune of listening to some of the Albums he either produced, played in, or both, which by the way number over 50 Albums, and believe me when I say, that he is the real deal and when it comes to the Canadian Music Scene, he is a true musical treasure.

Steve Dawson's music can be best described as having a dark side, a light side, and all sides in between, because his music really comes across as a mosaic and what color of music he adds to that mosaic simply comes from how he is feeling at any particular time. Like Jim Byrnes, an artist he knows well via not only playing on his albums but also producing and mixing some of them as well, Steve Dawson is also a great storyteller and he tells his stories in a clear and concise manner that are easy to listen to and just as easy to understand, as one quickly learns while listening to "Nightshade".

"Nightshade" consists of 12 tracks, 11 of which are dynamic new originals written solely by Steve Dawson. The one cover he does on "Nightshade", is called "Gulf Coast Bay" which is an "old Mississippi Sheiks tune", one in which he reprised from the Tribute Album and Tribute Concert DVD he did last year, paying homage to the Mississippi Sheiks.

As with previous releases, Steve Dawson took on the reigns as Producer and Mixer for "Nightshade" and also, as on other Albums, he has once again surrounded himself with great musicians and singers which included, Chris Gestrin (Keys), Keith Lowe (Bass), Geoff Hicks (Drums), and singers Jill Barber, Jeanne Tolmie, and Alice Dawson. With Steve's amazing Guitar work and Vocals, "Nightshade" comes together like a fine vintage wine and in doing so Steve has quite possibly created his best Album yet.

As with other works of Steve Dawson, it is his amazing gift as a Guitarist which has always stood out. "Nightshade" is of course, no exception to that rule. That is evident from the very first notes of the opening track, "Torn and Frayed" and continues in abundance throughout "Nightshade", clearly dominant in all his songs regardless of what type of guitar he is playing. Track 7, "The Side of the Road" even gets him showing us his musicianship as a banjo player, which adds even more to the mystique that is Dawson's music.

Many will probably be saying, that Steve Dawson's "Nightshade" is his best album, to date. I have not heard all that he has, done but I tend to think that they may be right about that.

"Nightshade" is the kind of album that seems to transcend just simply comparing it to a bunch of different genres. To be sure, it got the blues on it, but there is so much more to this album, which makes it uniquely Steve Dawson's and uniquely very very good.

"Nightshade" is yet another great representation of a great Canadian artist. Fabulous CD and Highly Recommended...