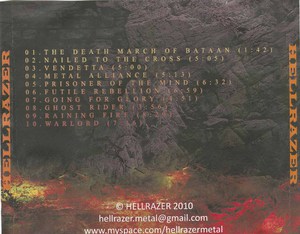 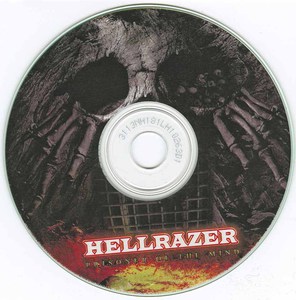 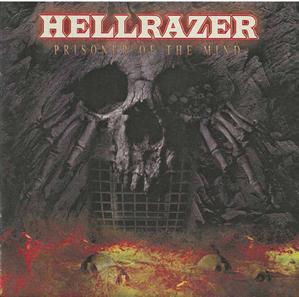 Prisoner of the Mind

The cover art was created by Anestis Goudas for derz.oth Design. The CD was released in Feb 2010 and features lead vocals by Julia Badescu on "Raining Fire" and "Futile Rebellion". For recent reviews please visit Metal Underground, Powermetal.De (both in German), and Aristocracia Webzine (in Italian).

“We’re really big in Germany, you know,” states Dan Houser, bassist for Calgary, Alta. metal quartet Hellrazer. He’s kidding, but the fact of the matter is, the band does have fans worldwide, thanks to the MySpace universe. With over 24,000 “friends,” Houser cites it as their biggest marketing tool, except when doing “really ballsy things like call up promoters and say, ‘Hey, we’d like to play your show!’” Houser adds.

But when it comes to promoting their upcoming album, Prisoner of the Mind, getting the gig won’t be an issue. They’re booked in at The Distillery in their hometown for Feb. 27, 2010, the official release date for the second full-length release.

It was getting the final product there that proved the challenge, but one that a serious commitment to what they pictured releasing helped make a reality. And contenders for the patience poster boys of 2010.

“It was just a huge amount of work,” says vocalist / guitarist DrZ. “We’re all kind of perfectionists in what we do professionally, and we apply that same rigor to something that should be a hobby. But we feel that if we put something out there, we want it to sound as good as it can, as well as we can.

“At the end of the day, we tweaked obsessively everything that went on the CD, from the drums to guitars, vocals. I don’t know how often we recorded Stan’s solos, because he’d listen to it after and go ‘No, I don’t like it, I want to come back and redo it.’”

And then, “We’d go through the songs note by note and someone would hear one note that was slightly out of tune and we were all motivated to go back and do it right,” notes lead guitarist Stan Nakanishi.

After about a year and a half in the making, though, and the self-produced, mixed and masted album is finally ready to share with listeners.

“We’re very excited,” says Stan. “We’ve been working on it for a while now and we took a lot of time rehearsing the songs, spent a lot of time recording, and we’re looking forward to other people getting to hear it too.”

Prisoner of the Mind is Hellrazer’s second full-length album, the self-titled one they released shortly after the three-song demo they promoted back in 2006.

“That first one was a little less professional effort,” admits DrZ. “It was put together very quickly and we were proud of it at the time, but this new one is much, much higher quality in terms of the recording and songwriting and musicianship.”

A few years and line-up change can have that effect, and Hellrazer has proved that since the bands 2004 origins.

Comparing their music to the likes of Gamma Ray and Judas Priest, DrZ says, “It’s more aggressive and everybody has gotten better and the two new members – although they’re not really new – Dan and Stan really pushed everyone to get better at what they were doing. They’ve had a huge influence that way, and a huge influence on the way it sounds.”

Eight songs from the 10-track album were already written when Houser and Nakanishi joined forces with DrZ and Kegger, Hellrazer’s drummer, in 2008.

“When we joined the band a year ago, a lot of the drums and rhythm guitar had already been recorded,” Nakanishi recalls. “It was sort of jumping in and taking on the songs live, and then taking some of that energy into the studio. So for us, it was just really trying to make the most of what was already established.”

“Between DrZ and me, we had had some discussion about what we would do,” Kegger adds.

“And then we wrote a couple more after (they joined). And I think our attitude in general is that we don’t put filler material on CDs. If we have a song it’s going to have to be a good song, otherwise don’t bother with it, so we don’t actually have any throwaways, at least we don’t think so. At the end of the day there was really no choice to be made. We had 10 good tunes that we were really happy with, and that’s what ended up on the album,” says DrZ.

He also says that one thing is for certain and that is, “we did a better job recording all the instruments, we did a lot more direct recording into the computer so we had a little bit more control and for the drums we actually sampled them after recording just to get a better sound, which we didn’t do before.”

Utilizing Adobe Audition for the main recording, and then a program from Isotope for the post-production work, allowed them more control.

“I think the production for a self-produced album is good,” says Houser.

“And most of that credit goes directly to Gerald because he’s the one that could stay up all night to manipulate software. We just showed up to play the songs,” he chuckles.

That’s not entirely true, according to DrZ.

“Everybody in the band has their own opinions and input into what they think sounds best,” he says, and everyone had a say in how the final product would sound.

And these days, DrZ no longer has the pressure of being the primary songwriter, something he embraces and looks forward to developing.

“We’re in a stable line-up now that we’re happy with, but before that it was just me with some input from other people. The two songs on the new album that were written collectively are “The Death March of Bataan,” a sort of Judas Priest-like Hellion-type intro that Stan came up with originally, and “Raining Fire,” which was more of a studio jam. Personally, I prefer writing songs as a collective because everyone is happy with them and feels like they’re a part of it,” he explains. “It just worked out before that I had more ideas than any of the previous line-up of the band. Kegger wrote a song for the first album called “Dehumanizer,” which is one of our favourite live songs to play.”

Hellrazer also has an “unofficial fifth member,” a guest vocalist on the forthcoming album.

“Julia is a colleague of mine from my department at the University of Calgary,” offers Houser. “We brought her in specifically because we were all working on a tune that needed a very strong vocalist to carry it. DrZ is a good metal vocalist, but we all acknowledged there were some places that could use somebody with a broader range of experience to fill out the tune.”

They brought in the vocalist for “Raining Fire,” and her voice suited what they were looking for so well, “we’ve since brought her in to sing a few other things as well.”

Houser himself comes from a blues background, “so the bass lines I play are less metal and more pocket playing, I would say, and Stan’s influences are all over the map, so his solos come from chaos theory, I think. But the net result is that people seem to like the stuff when we play it live, and I think that’s because it’s metal, but it’s still fairly accessible in that way.

You can check out Hellrazer live at The Distillery in Calgary, Alta. on Feb. 27 and help them celebrate the release of Prisoner of Mind. They’ll be hitting up the Crown Pub in Edmonton on March 6. And make sure to tune into CJSW’s Megawatt Mayhem on Feb. 20 for a sneak peak at the album and a live interview with the guys.
http://pitchblack.ca/2010/02/01/hellrazer