Myles, David - Into the Sun 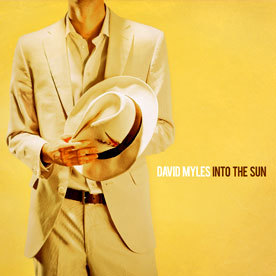 I’m sure you will read endless quips about David Myles releasing his new record, Into the Sun, two months too late. Quick paragraphs about how the breezy, tropical melodies would be perfect for lazy days, bbqs and some sort of Utopian endless summer.

To be fair, if you only heard the Classified-produced single, “Simple Pleasures”, you might be fooled into thinking Myles wrote these songs as he pined for warm days and beach parties surrounded by friends and cold beers. When you really dive into Myles’ 6th LP, you realize there’s a lot more going on than breezy, sun-kissed folk nuggets.

Myles, his trusty guitar and soulful voice navigate through Latin and African sounds, not as an intrusive tourist but as a gracious guest. David isn’t looting tried and true sounds. Into the Sun isn’t a collection of Paul Simon or Fela Kuti knockoffs and it certainly isn’t an East Coast take on the indie-approved, Brazilian sounds that Seu Jorge made ubiquitous. Most importantly, Into the Sun, isn’t an escape. From the opening moments of the record, we hear Myles addressing the real life concerns of wanting to be a better lover and a better man.

Even with this new sonic palette (the two instrumental numbers showcase Myles’ ability for arranging bigger sounds and the samba gem, “Nina” is delightful), it’s obvious that Myles is still a hopeless romantic; “Falling in Love” and “Ooh La La” may exude that casual island feel, but these warm, tropical breezes are as heartfelt as anything Myles offered up on his incredibly soulful LP, Turn Time Off.

It’s impressive that when he wants, David pens songs that would win over any of Jack Johnson’s remaining fans (case in point, “I’ll Never Know”), but instead of simple ditties about banana pancakes or surf trip montages, Myles turns the microscope inwards and makes the experience a little more accessible and certainly more tangible.

Myles also balances the listen with several songs that shy away from the soft white sand and picturesque settings. The synth textures that dance behind David’s voice on “Time to Be a Man” make it my favorite Myles song to date, and “Long Dark Night” is as good as modern folk gets these days, successfully delivering strings and spot-on harmonies without cluttering the mix.

Tropical sounds may be new to Myles’ repertoire, but he reveals them with remarkable success and restraint. David’s continual drive to improve as a songwriter means sounds are probably just another club in his bag instead of a crutch to lean on. Either way, Into the Sun is another rock solid record in David Myles’ catalog, one that should help the talented NB songwriter find bigger audiences smiling back at him.
-herohill