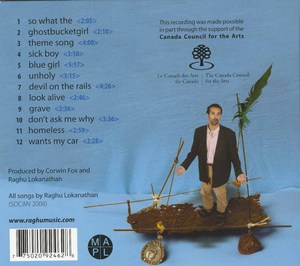 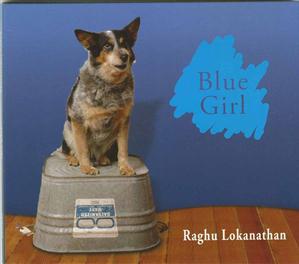 Raghu Lokanathan’s songs have been compared to those of Woody Guthrie, and by no less of an authority than folk legend and labour activist Utah Phillips. But that was before the Victoria-based musician issued his third CD, Blue Girl, and took a wild swing onto the weird side of the road.

Between the gang-chant exclamations and chittering strings of the title song, the creaking soundscape that accompanies “Devil on the Rails”, and the ironic church organs of “Unholy”, Blue Girl finds Lokanathan sounding fully at home in sonic waters that can only be described as strange.

“I feel like as I continue writing songs it takes me into more and more peculiar territory—and that’s the joy of it, too,” he explains, on the line from his Vancouver Island home. “With this record, particularly, I guess I was ready to get into the idea of being adventurous with sound as well. I consider writing to be an adventure, but this was the first time that I really dived into the possibility of recording also being a kind of adventure.”

Even in Lokanathan’s more conventionally structured songs, there’s often a sense that things are not quite as they seem, or that the world contains more than might be apparent on first glance.

“Yeah, that is something that I’m going for, because, for me, the experience of beauty is very close to the experience of strangeness,” he says, adding that he sees some parallels between his work and the way Yukon songwriter Kim Barlow operates.

“I really like the sense of the fantastic in her writing,” he notes. “She kind of writes fairy tales.”

So it’s intriguing that Barlow and Lokanathan plan on getting together to share songs. Along with Nova Scotia’s Catherine MacLellan, they’ve formed Wise and Weathered, a songwriters-in-the-round trio that’s currently in rehearsal for its first Canadian tour.

“Kim had a project she was doing called the Pan-Canadian Folk Ensemble, where she was touring with Christine Fellows and Old Man Luedecke and a cellist and a violinist, and I was really taken with the idea of a few songwriters being each other’s band,” Lokanathan says. “It makes it a little less lonely on the road—and it’s interesting, with three distinct songwriters, to make some kind of cohesive show.

“Of course, it doesn’t really have to be cohesive, either,” he adds. “I don’t mind a few jagged edges.”
Alexander Varty, straight.com