This spring, Raghu Lokanathan will be touring to support his new album, Blue Girl, a collection of songs that integrate all the shifting attitudes and styles of his last seven years of writing and learning; an album that reflects his developing vision of himself as a performing and recording musician; an album that takes bold risks and vividly spins the stories of characters that are as likable and warped and dignified and unlikely as the grinning, smoking man himself.

Raghu is a thin, bearded, bespectacled man who will smile if you look at him. Almost a decade ago, he came to Prince George on the run, to live in the care of his brother, a daydreaming surgeon. Raghu’s latest experiment in the countryside of Nova Scotia had led him to conclude that he was not cut out to be a farmer. He was relieved to find that all he had left were the songs he’d made, and a drive to keep making more.

So he wrote and wrote and wrote songs, better than any he had ever written before; clever, sympathetic songs that showed a dark, and darkly humorous, edge. He played some great concerts and by the time he released his album Caledonia, everyone could see he was headed for bigger things. His songs were played and regularly requested on CBC programs like the Vinyl Café and Richardson’s Roundup, whose host Bill Richardson said the song “Ramona” was “genius”. Raghu was asked to play at the Vancouver folk festival, where the late Utah Phillips heard him, and said that Raghu “writes songs like they used to a long time ago.” He toured across the country. Other artists began covering his songs. He wrote and wrote and wrote brilliant new songs, grittier than before, with radical experiments in song structure and point-of-view that always sounded natural, even inevitable.

After this first foray into life as a touring, recording songwriter, he decided to step back, take stock and do some thinking about what kind of musician he wanted to be, and what kind of life he wanted as a musician. So he dropped everything, all his plans, and went back to Prince George. He picked up a job teaching guitar, accordion, and banjo. He got a weekly restaurant gig. He took flatpicking lessons. He and I started working our way through the Allan Lomax folk songbook and performed across northern B.C. as The Cottonweeds. Meanwhile, Raghu wrote and wrote and wrote new, abstract, curious songs, perhaps incomparable to any others he had ever written. He began to recover a sense of himself as a performer and to re-evaluate his relationship with the music industry, making new plans to build his career slowly and carefully.

And then Raghu’s partner got a job in Victoria. So he moved with her, after first producing a short-run untitled EP that I recorded. When he arrived, he quickly found work as a page at the Victoria public library, where in the middle of his duties he could still think his own peculiar thoughts. Soon, Raghu and a friend of his, folk scene veteran and indie producer Corwin Fox, began to collaborate musically, putting together a snappy little EP called Petal Press which they toured British Columbia to support. The two clicked beautifully, laying the foundations for the recording of the Fox-produced Blue Girl. And the rest isn’t history yet, but they’re working on it.
- Jeremy Stewart 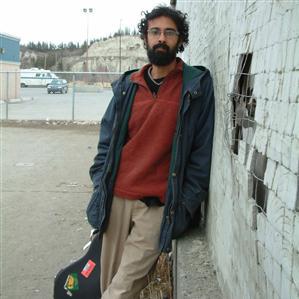