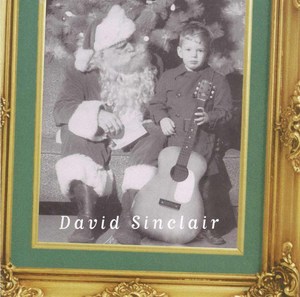 In 2007 and 2008, the Vancouver Province chose 'acoustic christmas' as one of the top 5 favorite all time christmas recordings, along with Bing Crosby, Aretha Franklin, Leon Redbon. "This is fast becoming one of my favorite Christmas records ever. Sinclair is one of the finest guitarists in town...His playing is wonderfully lyrical and contemplative, perfectly suited to a quiet evening away from all that seasonal razzle dazzle out there." "David is a beautiful and gifted guitar player and he shines in his renditions of these gentle and spirited Christmas songs." Sarah McLachlan, recording artist

As a member of Sarah McLachlan's band since 1993, and with k.d. lang from 92-95, David has toured extensively in North America, Europe, and Japan and appeared on Jay Leno, David Letterman,Conan O'Brien, Arsenio Hall, Saturday Night Live, Larry Sanders,Good Morning America, Rosie O'Donnell, MTV Unplugged, VH1 Storytellers, The Grammy Awards Show (93, 98), Juno Awards In the 80s, his bands Straight Lines and Body Electric had a series of radio hits including juno-nominated Letting Go. As a studio guitarist, he has worked with many Canadian artists including Sarah McLachlan, Amy Sky, Rita MacNeil, Michael Buble, Daniel Powter, Leon Bibb and Eric Bibb, Paul Janz, Valdy, Susan Jacks, Terry Jacks, Prism, Irish Rovers, BTO and Gary Fjellgaard. He has played on and/or written for TV series including North of 60, Reboot, Beast Wars, Fly By Night, Tom Stone, Edgemont, and Weird-Ohs. He has performed with the Vancouver Symphony, The Opera Orchestra and the Vancouver Chamber Choir. He was featured in articles in Guitar Player magazine in July and August, 1998 and October, 1999.