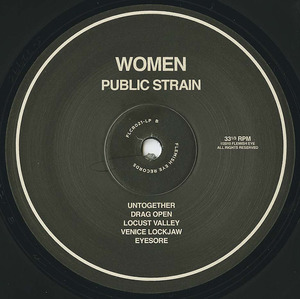 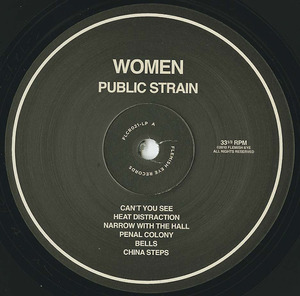 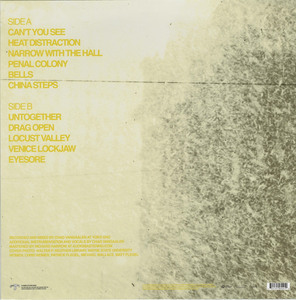 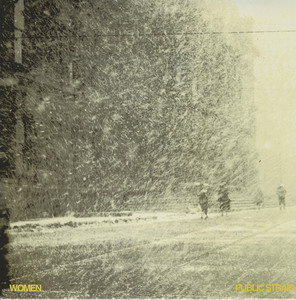 On their self-titled debut, Women kept their howls and hooks separate. The Calgary-based post-punk quartet dished out gritty drones and pristine pop with equal aplomb, but the album's highlights-- the spiky and dissonant "Shaking Hand" or the melancholy psych-pop nugget "Black Rice"-- stuck to one camp or the other. Two years later, Women have bridged the divide. The group's sophomore effort, Public Strain, pushes forward in both directions-- the hooks are noisier, the noise is hookier, and both are fogged over with enough reverb to make Felt records seem bone-dry by comparison. Fidelity-wise, it's a step down. But in just about every other sense, Public Strain is an improvement-- a bleak but beautiful record, full of subtly skewed melodies.

Women's debut revved up quickly-- a minute's worth of garage-rock stomp dropped straight into the throbbing art-noise of "Lawncare". Public Strain is a more subdued record. Album opener, "Can't You See", drifts gradually into form-- the bass anchoring Patrick Flegel's vocal amid a haze of bowed guitars and abstract sampler-squeals. "Narrow With the Hall" pits ghostly vocals against a sea of feedback, bound together only by a couple of wiry, tremolo-riddled chords. The atmosphere owes a distinct debt to the noisier side of 1980s underground music-- particularly Sonic Youth's darker, skuzzier early days. But the when it comes to melody, Women dial things back a few extra decades. The Flegel brother's vocals are harmony-heavy, recalling the work of ornate 60s pop acts like the Zombies and the Electric Prunes. The mixture produces a unique, gray-paisley vibe-- the sound of vintage psychedelia bleached of its color.

But by the halfway point, Public Strain shifts toward darker, more paranoid territory. "China Steps" rides the eerie, tick-tocking, interplay between the rhythm section and two de-tuned guitars. The Flegel brothers' ethereal vocals drift in and out of key, creating an unsettling call-and-response at the song's climax. For all the sonic bric-a-brac, it's these vocals that push Women off of the retro-rock grid and into territories unknown. Their songs start out familar enough, but the Flegels-- along with guitarist Chris Reimer, who also sings-- frequently dovetail into unexpected, crooked-sounding harmonies. In the first minute, "Venice Lockjaw" screams Velvet Underground knock-off. But by the time the chorus swings around, things have been screwed an octave up into choir-boy territory, giving the song an awkward but tender resolution.

Public Strain was recorded alongside producer Chad VanGaalen, who also helmed Women's self-titled record. His production is chilly and thin-- possibly a nod to the early-80s indie bands that Women hold in high regard. Or maybe it was just the weather--the sessions were conducted in Alberta, Canada during the dead of winter. At first listen, Public Strain is impenetrably cold. But deep down, beneath the blizzard of noise and hiss, something's burning.
-Aaron Leitko, Pitchfork