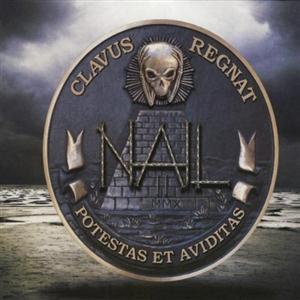 There is an underground Canadian Hard Rock/Metal band called Nail, that has conquered up one hell of a great album called, Power and Greed (MOLE Records). Rooted in Classic Hard Rock and Metal with a groove, these Canuck's might be unknown but they completely rock! With influences of Sabbath, Rush and Tool, how can they miss? Add in some superb female vocals with balls of steel and attitude to match and some great, tight musicianship and you have yourself a band that grabs your attention straight away.

Power and Greed is comprised of 10 uber solid songs that features the awesome vocals from Cindy Wiechmann, who powers her way through each tune with enough testosterone to make a lot of male singers feel like a little girl. She manages to sing like a bird, ooze so much soul and yet keep things heavy all in the same song. Cindy Wiechmann has got a set of pipes on her, I tell ya. Sounding like a combination of the great Sass Jordan during her rocker days of her album Rats, and the much too often forgotten Sandi Saraya, Cindy is the ace in the hole that ultimately sets this band apart. Progressive at times, with a heavy groove and swagger, Nail delivers song after song, after song. Tracks like "King of Fools", "Bottom Feeder", "The Devil U Know" and "Skin" are just the tip of the iceberg and ranging in styles from Tool like progressive heaviness to Tesla's brilliant straight ahead Rock.

Accessible songs with hooks, filled with a ton of substance and excellent '80's styled guitar pyrotechnics by Rainer Wiechmann, make Power and Greed a great statement of the past 20 plus years of Hard Rock and Metal. Musical performances are great and the vocals are simply killer, but the production is the downer here. The drums sound great and so do the guitars but the overall mix is really muddy and dull and just sonically subpar, but this batch of songs can't be held down even with this bad mix.

Nail is comprised of veteran musicians and their experience shines through with the quality of their material. Power and Greed is Nail's sophomore release and it is as solid as it comes and sans the bad mix is almost a 5 star record. Bands like this never get their chance or are just simply overlooked, but Nail are a great band and damn it if Cindy Wiechmann isn't one of the best female Hard Rock/Metal singers that I have ever heard. She blows away a lot of Metal singers, Female or Male and she is worth the price of the CD, all on her own.
-Butch Jones