Neumann, Thea - Lady and the Tramps 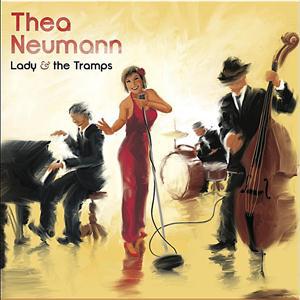 Edmonton’s Thea Neumann has been singing in some fashion or other for most of her life, fine-tuning her voice as her musical interests and experience expand.

“It’s a complicated process,” she observes. “Who you listen to and who you play with really does influence how you’re going to perform, especially in something as interactive as jazz.

“The voice is so personal and your job is to convey everything into words and sounds. I think people appreciate that, if you can just open up without worrying about things and just become a conduit to the audience.”

Thursday at the Haven Social Club in Edmonton, Neumann will mark the release of her first full-length album Lady & The Tramps.

It’s a powerful set of tunes, and it doesn’t hurt that the “The Tramps” are one of the best jazz trios around — pianist Chris Andrew, bassist Kodi Htuchinson, drummer Sandro Dominelli — with notable cameos from the likes of P.J. Perry, Curt Ramm (trumpeter for Bruce Springsteen) and her partner, guitarist Clint Pelletier. But from its very upbeat opening grooves, Lady & The Tramps is clearly a triumph for Neumann, who carefully shaped the album over the past three years.

About half of the ten tracks fall into the standards category, but Neumann also adds unlikely covers of songs by Gillian Welch and Radiohead and two numbers of her own, shaping it all with tasteful jazz phrasing and a sense of fun. She co-produced the disc with Scott Bozack, with funding from Rawlco Radio.

Neumann grew up in a musical home, taking piano and voice lessons from an early age. As a kid, she sang in choirs but it wasn’t until she found herself singing for Edmonton Musical Theatre at 17 and listened to a set of show tunes recorded by Ella Fitzgerald that she was struck by the power of jazz.

“Listening to her doing ballads just floored me, but it was hearing her improvise that made me realize that your voice is really an instrument, that you could have this conversation with the band and that you weren’t set apart from this group of musicians.”

She broadened her knowledge of singing styles further during the two-year program in vocal performance from what was then Grant MacEwan College, and sang with the backing of the U of A/MacEwan Big Band. That’s also where she first came to know the work of singer Sunny Wilkinson, who eventually became her instructor-mentor in another two-year stint at Michigan State University in Lansing.

During that time she visited Chicago regularly on weekends. Seeing Kurt Elling sing in his regular gig at The Green Mill left a powerful impression, she says, also crediting Ani DiFranco and Oscar Peterson as particular influences. It gave her with an understanding of her own gifts and where she wants to take them, she says.

Neumann worked with guitarist Clinton Pelletier for the first time in 2003. Today they’re partners in life and in music, with a new recording studio in their basement.

She now splits her time between her solo jazz act with The Tramps, her work with his Gypsy-jazz trio Hot Club Of Edmonton, the Pelletier family band in Saskatchewan, occasional weddings or other commercial dates, and giving private voice lessons on the side.

Thea Neumann will perform tunes from Lady & The Tramps Thursday at the Haven Social Club (15120A – Stony Plain Road). Doors open at 8 p.m. before guest opener SIM. Tickets are $10 in advance from http://yeglive.ca or at the door.

In an age when using high technology to create or capture music is taken for granted, it’s hard to imagine that the jazz scene was once aghast with the very thought of bringing electric instruments and funky grooves to the music.

That’s what happened back in 1970, when the late trumpeter and music innovator Miles Davis, his producer-editor Teo Macero, and a band of young players — most of them now reigning jazz icons — created the experiment called Bitches Brew.

I still recall the afternoon that a high school friend played it for me. It felt positively scary, especially the echoing horn effects at the start of the title track, and the exotic graphics only underlined that this was music from a culture I couldn’t understand. 40 years later it would rank on many people’s desert island disc list, including my own.

Call him a genius, or maybe just a musical facilitator, but what Davis and his crew did with those sessions exploded previous conceptions of what jazz — and creative music in general — could be. Bitches Brew and related experiments continue to have a crucial influence on creative music making in the world today.

Had Miles Davis not died in 1991 at age 65, he would have been 85 years old on Thursday. To mark that birthday and the anniversary of Bitches Brew the Edmonton Jazz Society hosts a rare tribute, with music overseen by bassist-bandleader Rubim De Toledo, including trumpeter Bob Tildesley, guitarist Peter Belec, saxophonist Jim Brenan, Chris Andrew’s keyboards, percussionist Raul Tabera and drummer Sandro Dominelli.

“Bitches Brew was a great inspiration for me in creating the Reclaim gigs that happened at The Black Dog for about three years,” says De Toledo. “The arrangements are loose transcriptions with open solo and collective improvised sections. Our idea is to capture the vibe and feel of each tune, but to keep it open to interpretation.”
-Edmonton Journal