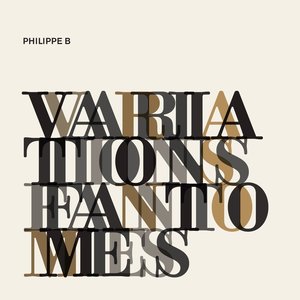 Three years after the appearance of his second effort, Philippe B is back with Variations Fantômes, the fruit of an intense introspection, out May 3rd on Bonsound Records.

For this third opus, the singer-songwriter drew his inspiration from a number of classical composers. Robert Schumann, at the end of his life, claimed that the voices of past composers were instructing him what to play. As Philippe tells it, I tried to listen to what these famous ghosts - of Ravel, Strauss, Schubert, Vivaldi - had to say. Every aspect of their work was about exploration, introspection and reinterpretation. While trying to decipher what these things meant to him, his creative process was fuelled by the music itself. Samples, passages lifted from canonical pieces, melodies, anecdotes from the life of a composer, and even the titles of certain oeuvres all found their way onto the album.

Thematically, the lyrics on Variations Fantômes reflect the concerns of these classical works: beauty, melancholy, faith, love and death. Although impregnated with external influence, the songs remain personal. With his unique wordplay and his ability to create worlds through images, Philippe B weaves stories of passion, remorse and torment.

Philippe B pairs the poetic lyrics with a guitar-based modern folk that is both moving and intense. The result is a harmonious mix of samples, guitars, keys and violins, that veers between the rhythmic and the calm; above all, it's a musical dialogue between the singer-songwriter and the ghosts of the great composers.

Included in the album booklet are 14 photos whereby 14 photographers have each visually interpreted one of the songs on Variations Fantômes.