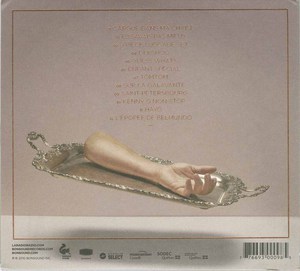 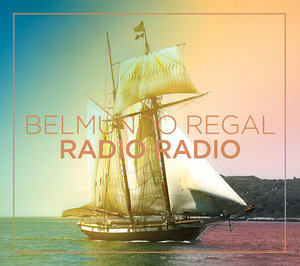 My french is not very good, is the first conclusion I come to while listening through Belmundo Regal by Radio Radio.

As a group they’re as much jokers and satirists as they are MCs. Their latest and Polaris Prize shortlist album Belmundo Regal was released on March 4th 2010, at a sold-out Just For Laughs show. The album is named after a stranger they met on a trip to Nova Scotia near Oak Island. The band spent the day talking with the stranger, who introduced himself as Belmundo, about the legend of a treasure that was buried there- and although their paths never crossed again, the band was so inspired by the stranger that they named their album after him. I wonder to myself if this is a joke or not, a theme that will haunt me the length of the album.

Since their last album the sound of the band has moved closer to electro pop. Their last album Cliche Hot (2008) relied on just voice and synthesized backbeats, and this new album sees the addition brass, guitar, and the fuller sound of higher production. But the step towards electro pop has also taken the band a step away from hiphop.

There’s an undeniable catchiness to Belmundo Regal, and it gets off to a smooth start in track one “Cargue dans ma chaise”. Unfortunately, the chorus delivery is annoying , and I can’t seem to understand where the female chorus singers fit into the picture. I don’t have much love for “Ej savais pas mieux” either, with its chorus of “hop, skip and a jump and a bump”. I can’t tippy-toe around it, that just sounds stupid in an anglophone’s ears. But at the end of track 2, there’s a minute long intro to the third song, “9 piece luggage set”, that had me laughing out loud as each of the 9 pieces of the luggage set were outlined to me: “garment bag, suitcase, briefcase, duffle bag, a hat case, toiletry kit, laptop bag, manpurse, wardrobe trunk”. This song is about jetset lifestyle and having a lovely nine piece luggage set. Everything the band does is coloured with a sense of humour- and nothing is sacred. The band satirizes yuppies and jetsetters on the same album as hippies, and even, in one of my favourite songs on the album, liking Kenny G’s music.

Many of the tracks on this albums seem to be throwaways to me- more novelty than replay value. Most of that middle chunk on the album (“Dekshoo”, “Guess what?”, “Enfant Special”, and “Tomtom”) become annoying for the same reasons they were amusing the first few plays through. I do like the beats on “Sur la galavande”, and the chorus of “say that disco gypsy jazz,”- and I find this half of the album more listenable than the second half. Of course, the real jewel on this album is “Kenn G Non-Stop”, which unexpectedly combines sexy, dirty backbeats, Snoop Dogg rhyming, and back-up female vocals that would be cheesy if this wasn’t partly a humour outfit.

It’s a shame in a way that the music is so disposable. Cliche Hot had both the humour and the hiphop to win me over to the band. They were kind of like a promising Acadian Chromeo. There’s no new “Jacuzzi” on this album, and the rhymes sometimes just lack cred. I wanted to like this album, the idea of Acadian humour hiphop is original enough to deserve a listen, but this time around they lack the cool they need to pull it off.
Natascha Malta, Music Vice