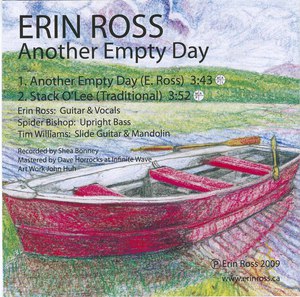 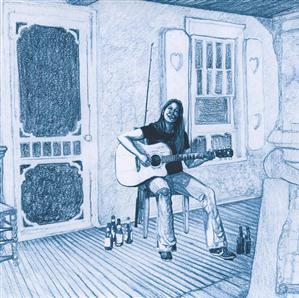 Local guitar arist Erin Ross released another 45 on October 2. Side A is an original named "Another Empty Day," a swampy relaxed piece featuring slide guitar and some wonderful lyrics: Ross' voice is at an absolute premium in this song, strong mature and really focused. This single ought to establish Ross as one of Alberta's foremost female singer songwriters today. There are nice changes in the song, smooth arrangement and it was recorded really well. It's also a very intimate recording. BeatRoute had a chance to sit down with Ross and ask her a few questions about her writing and recording process.

BeatRoute: Okay, so I have to ask: why a 45 and where did you record this baby? Erin Ross: I like 45s, that's why. I collect records and therefore wanted to make some of my own! The record was recorded at Sak's Music in McKenzie Towne, by Shea Bonney. It was recorded digitally and we all sat in the same room and played together, vocals too.

BR: Having jammed with you before, I know you can play all the instruments on these tracks. How come you hired the parts out? What's the benfit (to you) of working with the other people and what's your relationship with these folks? ER: Firstly hiring parts out allows the record to be recorded live from the floor, which you can't do if you are playing all the parts yourself. Secondly, working with other people allows you to develop a song in a way that brings different elements out. I feel that music is a dynamic and ever changing medium. As such, old songs can become new when people put themselves into the music... the process of collaboration is a huge part of what keeps music unique and also what makes the process of playing interesting. In short it's fun. Thirdly, my relationship to Spider (Mike BIshop) and Tim (Williams)... well, Spider and I have played together on and off for a lot of years in a few different configurations. I have always enjoyed his upright playing. Tim has also been a friend, influence and support for a number of years and they both seemed a natural fit given the scope and style of the project.

BR: I noticed in the credits you list guitar first and vocals second. Is this on purpose? Do you consider yourself more of a guitar player who sings rather than a singer songwriter? ER: I view guitar as my first instrumnet for sure, I have put alot more time and energy into playing guitar than I have most other things in my life. (However) I like to sing, and for me it's part of the creative process of writing. I am gaining more confidence vocally and feel like I have more control now then ever.

BR: It certainly shows. I've always heard a lot of Townes Van Zandt in your sound. Somehow even as a kid you managed to tap into that pained, honest and raw vibe that should only come from... well to be honest, years of self- abuse, drugs and being disconnected from society. Not once has your sound ever come across as fake, though. How did you discover this side to you,and where do your lyrics come from? What's your inspiration? What music has influenced you over the years? ER: I can only claim the lyrics for the title track, side B of the 45 is a traditional tune called "Stack O Lee." I suppose my lyrics are inspired by the stories I see around me or stories that strike a chord. As a writer I aim to either tell a story or get to the core of a feeling or experience whether that is bittersweet or funny or sad or dramatic and convey some element of that to my audience. As for influence, well I simply love music and listen to a huge diversity. But for the styles that I play, I am greatly influenced by a lot of the early country blues pickers. To name a few we'd be looking at Mississippi John Hurt- I learned "Stack O Lee" from his version- Rev. Gary Davis, Elizabeth Cotten, Skip James, Etta Baker- the list goes on. Other influences would include Gillian Welch and David Rwlings, Patsy (Cline), Jorma Kaukonen and some local players like Tim Williams and Dave Hamilton. As you know I also love rock n' roll and recenly have been exploring some elements of that again in my writing and I am looking forward to taking that further.
-Beatroute