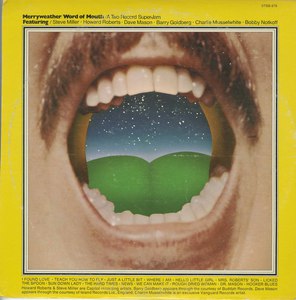 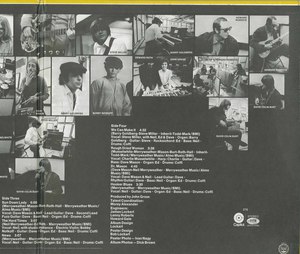 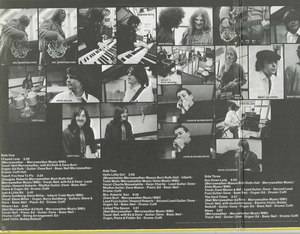 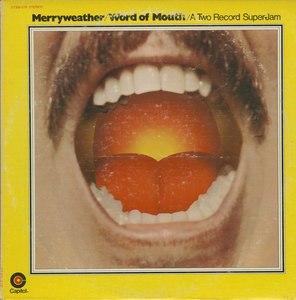 Ruth: How did the second Merryweather record, "Word of Mouth" come about?

Neil: It's kind of funny because it was my big mouth that started it off. I was driving our car with the guys in the band to our rehearsal facility in Hollywood and came to a stop sign. I had to make a left onto Sunset Boulevard. I looked over and recognized Dave Mason walking down the sidewalk. I was a big fan of "Traffic", so I immediately knew it was him. I yelled out the window "Hey, is your name Dave Mason?" He stopped and shrugged and said "I think so". He came over to the car. I introduced myself and told him our band was on Capitol Records, and asked if he'd like to get together to jam. That was the beginning of it.
I came up with the title "Word of Mouth". Robert Lockert and I came up with the mouth design on the cover. Also, at the time, one of the records getting airplay on the radio was the supersession album with Stephen Stills and Al Kooper, so I thought jamming with other musicians was a good idea. I was shopping in Hughes Market one day and even asked Mickey Dolenz from "The Monkeys" if he'd like to join the jam. He was all for it, but I lost his number. As for the other musicians on the record, Morey was working with Charlie Musselwhite and Barry Goldberg, and Steve Miller was on Capitol.

Ruth: How were songs generated at the jam?

Neil: When we got together in the studio to do the record, there was nothing written. The only thing I had written previously to the sessions was a song called "Dr. Mason" for Dave to do. "Teach You How To Fly" was a song that came about when Howard Roberts (jazz guitarist) came to the session. He started playing a chord pattern, and I asked him about it. He said it was a chord change that his 12-year old son was playing on the organ when he left to come to the session. I said let's turn it into a song. I saw Howard many times years later and he always thanked me because his son got credit on the album! He was a cool guy and a great guitar player. The album was also an occasion for Steve Miller and Barry Goldberg to play together again since their band broke up years before.

It was a fun album. Charlie opened his briefcase that he carried with him everywhere. He pulled out his harmonicas, his little microphone, and 2 bottles of vermouth. I remember Charlie and Dave drinking the vermouth when Howard Roberts opened up the cigarette case, I thought to smoke a cigarette, and there were all these pre-rolled joints in it. We had a great time!

The concept of the album was jamming with guests. The band did some of our own material as well. After all, it was our second album. The band was tight enough to put something together quickly. Really, how do you jam? You call out a key, the drummer establishes a beat, you lock into some changes, and you jam. We came up with some changes and basically took it from there – it wasn't like we did ten takes. There was a review of the record in Rolling Stone Magazine by someone who said we used gimmicks, like singing through a megaphone. What really happened was Charlie was singing through his green bullet microphone. He played harmonica and sang into the microphone, and both came out of this little amp that he had. That's the free world we live in – people are allowed to make statements, express their opinions and criticize such as this instance, but without basis, or any understanding of what they're talking about.

When Steve Miller showed up the next day, a reunion between him and Barry took place, the first time they'd played together since the Miller Goldberg Blues Band broke up. There was a different kind of vibe in the air, not as loose as the Mason, Musselwhite, Roberts session. Steve brought a new song he'd written and we did some blues-rock. It was a good night.

Ruth: You mentioned Stephen Stills – I heard you had a shot at playing bass with CSN – what happened?

Neil: When Merryweather was living in Topanga Canyon, I remember Taj Mahal coming by the house where we were staying, and other musicians as well. It was a family oriented vibe in Topanga during those times. Chris Sarns, the road manager for Buffalo Springfield came by a lot. He even got me a bass amp from Sun Music. He was staying at Stephen's cabin while Stephen was away in London. Chris showed me where the key was stashed, and told me that if I needed to get away to write, I should come over and let myself in. So one day I did. I picked up one of Stephen's bass guitars. It was a left-handed Fender jazz bass, but he had strung it right-handed. I picked it up and played it for a minute. I heard a noise, looked around, and there was Stephen just out of bed, wearing just a pair of underwear with a guitar strapped on. We jammed for awhile. Then, Chris showed up and we all jumped into a Volkswagon bus. Stephen was driving, and we bee-lined it to the Hollywood Roosevelt Hotel. Stephen ran into the lobby and called up to Judy Collins room and told her to come to the window. We were standing in the parking lot and Stephen was yelling up to her to come down. He was crazy about her – it was like a scene from Romeo and Juliette.

A short time later, Merryweather stayed at a variety of motels in Hollywood to be closer to the music scene. CSN was in the studio. Chris Sarns came over to the motel where we were staying and invited me to go to a session. They were playing "Suite for Judy Blue Eyes" that Stephen had written for Judy. Sarns said Stephen had sent him to ask me if I was interested in joining CSN. I had to think long and hard about this offer because I really liked Stephen. I thought he was one of the finest singers/songwriters/musicians around. To me, the Buffalo Springfield was a great band, but Stephen's stuff was the best. I was really honored to get the invitation, but I turned it down. It was a couple weeks before the "Word of Mouth" album came out and I wanted to be loyal to "Merryweather".

Ruth: It seemed that everything was going well – why did you leave the band?

Neil: Everything was going well in some ways, but in other ways, there was somewhat of a band implosion as I mentioned earlier. While Dave Burt was living out in the Valley with a girl, we were staying in motel rooms, at our rehearsal facility, and at times even had to sleep in the car. Some nights were really cold, and the three of us along with our roadie, were sleeping in our car, but not Dave – he was sleeping in a nice warm bed, and then showing up to rehearsals late, copping attitudes, and I started to really dislike him. I was contemplating replacing him and I had talked with a few guitarists that were ready to jump right in, but I let it slide.

On one of the rare occasions after a show at Balboa Stadium, Dave decided to stay with the band at the motel where we were staying. I was with my girlfriend at the time, Lynn Carey, whom I had been seeing and writing some songs with. She was the singer in a group called "C.K. Strong" on Epic Records. We played on a bill together with the "Blues Magoos", hit it off, and became an item. Lynn was a drinker, and could be very loud, and we had a spat. That night at the motel, Dave Burt stuck his macho self into the mix and that was basically it. At the same time, another band member sided with Dave out of jealousy of me as the leader of the band, which happens in almost every band. The situation came to a head and I told Lynn we were leaving. Just as I opened the door, Rick James was about to knock. He found out where we were staying, and came over to see me. I didn't even get a chance to talk to him because of what was going on, and I said to him "Here Rick, you want a band, they're yours." In the heat of the moment, I quit and walked away.

Ruth: Looking back on the situation, how do you feel about that decision now?

Neil: Under the circumstances, this was OK for the band because at least they weren't stranded. Rick did a thing called "Salt 'N Pepper" with them. I think back on it now and wish that level heads would have prevailed because I think "Merryweather" had a future. Our name was getting around, we were playing big gigs, and getting airplay and reviews. We heard that the promoter Bill Graham in San Francisco really liked our album. It was only a matter of time until we would pick up a tour and that's all it took to break an act. When we played live, we used a lot of the jam premise and really got into some exciting musical moments. It definitely had some energy to it. Our influences were different for acts in those days. Eddie and I came from a heavy rhythm and blues oriented situation which we incorporated into the band's sound. Coffi Hall was into the jazz thing, and Dave Burt was able to crossover all those genres. The writing and arrangements were unique and created some odd music. I think we could have gone pretty far, but unfortunately, that's the way Merryweather ended. But, Neil Merryweather didn't.

Another ironic thing that came out of this was a couple of weeks before I turned down the Crosby Stills & Nash bass job, Rick hit town with Greg Reeves, a bass played that he was going to work with to form an act, and Greg wound up getting the job with CSN, and Rick got my band out of it.

Ruth: Merryweather, Richardson & Boers was your next recording – tell me about it.

Neil: Well, there I was without a group and I thought I'd go back to Toronto because they had some great players up there. I felt comfortable going back there and knew I'd find some new band members and that it would work. So, Morey Alexander, my manager and I flew to Toronto. We hit the Village scene that we all played on during the 60s and found a couple of guys I knew of. Robin Boers had been the drummer for the "Ugly Ducklings", who had a hit single a few years before up in Canada, and they were a good blues band, and I knew he was a real solid drummer. We found John Richardson who played with "Lords of London" and "Nucleus". I liked his playing too, and liked him as a person. We bought them tickets and flew them back to LA with us. JJ Velker was a keyboardist from Calgary. He was in a group called the "49th Parallel" and they had just broken up. I brought him into the sessions and it worked out fine.