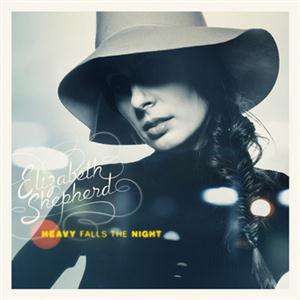 There is something so totally alluring about Elizabeth Shepherd's album Heavy Falls the Night that it bears very close listening. Every word and each note resonates with a certain swagger and at times, a soulful intensity that makes it impossible to give it a casual listen. Whether it is the manner in which Shepherd holds onto a spry note just out of her vocal range as if her life depended on it, or the unusual harmonies she overlays onto her "lead" voice, the effect is the same: it is mesmerizing. But she never allows this vocalizing to become de rigueur or predictable. Often tempering her flat delivery with soaring, bell-like tones of the Rhodes or the grinding triads and multi-colored arpeggios on the Wurlitzer, Shepherd draws the listener right in to her world. Joni Mitchell has that effect too, but Mitchell is confessional—almost vulnerable as she bares her soul. Shepherd eschews that Plath-like school, preferring to make oblique attacks on the senses, delivering a surprise as she takes hard knocks on her jaw.

Shepherd is also a wonderfully melodic storyteller and combines dense lyricism with clear annunciation almost as if she were reciting lyrics that are slanted into the music, as if the two were separate parts that just happened to jive by magic. The title song and "On the Insufficiency of Words" both illustrate the unique quality of her music. It is this subtle almost unobtrusive charm that makes her style attractive in a wan way. Her phrasing is also quite unique. The ebb and flow of her breath brings words, phrases and whole lines to the senses in wave after rising wave of intensity or calmness in a rhythm that conjures imagery of the pastoral. She is certainly in no rush to clutter feelings and emotions with the urban density from which many of these might spring. Still, the alternative is presented with near perfect counterpoint and timing.

This is because unlike many vocalists, Shepherd is a rhythmic singer who feels the rhythm of the earth in her whole being and makes music to its pulse. Perhaps this is why her emotions are so authentic and almost palpable when she sings. And this is also why she can pull off a wonderful tribute to another great vocalist in "A Song for Dinah Washington."

The beauty of the music also has much to do with the striking work of bassists Scott Kemp and Ross MacIntyre, drummer Colin Kingsmore, the unobtrusive percussion colorist, Roman Tome, vibes player Michael Davidson and guitarists Brian MacMillan and Paul MacDougall. Together these musicians assist Shepherd in making the dense imagery of Heavy Falls the Night a captivating album that sticks in the memory with the thick echoes that follow in the wake of the last notes of "Danny's Song."
-Raul d'Dama Rose