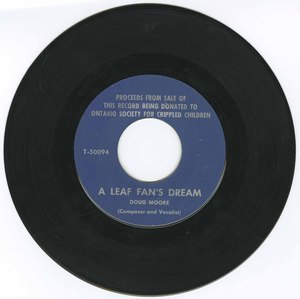 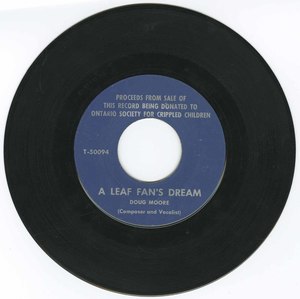 Doug Moore composed and recorded the one-sided single “A Leaf Fan's Dream” and donated the entire proceeds to the Ontario Society for Crippled Children.

"Doug Moore was born in Richmond Hill, Ontario in 1931. He was gifted with musical talent and was a natural athlete. As a youngster, he was an exceptional goaltender and was eventually drafted to the Chicago Blackhawks. He also excelled at his studies and chose an engineering career over that of a professional hockey player.

Today, these revolutionary ice making concepts and theories have been implemented in a wide range of community and professional facilities and are considered standard practice throughout the industry. He supplied the ice for the 1988 Winter Olympic Games in Calgary, Alberta.

The theories, practices and ice making concepts developed by Doug Moore are now accepted as standard practice by the industry today."