Doug Moore, the late Founder and President of Jet Ice was also the Chief Engineer at Maple Leaf Gardens in Toronto for 30 years. He was hands-on and understood the specific day-to-day needs of facility operators.

Doug Moore was born in Richmond Hill, Ontario in 1931. He was gifted with musical talent and was a natural athlete. As a youngster, he was an exceptional goaltender and was eventually drafted to the Chicago Blackhawks. He also excelled at his studies and chose an engineering career over that of a professional hockey player.

Doug’s success was due to his love of ice sports and kind spirit of sharing his knowledge with others. He encouraged other rink managers through his many seminars and teaching clinics. He willingly and diligently shared his practical knowledge through hands on training and elevated the position of Icemaker to the respectable level of professionalism it enjoys today.

Doug Moore’s contributions to the ice sports world have helped to give the industry the look and quality of ice that is enjoyed today by athletes around the world in the sports of Hockey, Curling and Figure Skating. He was an innovator of the arena industry, specializing in Ice Making Technology, speed-painting procedures and shared his vast skills and knowledge in this science willingly with facility owners, managers and operators throughout North America.

Today, these revolutionary ice making concepts and theories have been implemented in a wide range of community and professional facilities and are considered standard practice throughout the industry.

2004- Inducted into the Richmond Hill, Ontario Hall of Fame

2004- The Doug Moore Scholarship Fund was created in his honour based on his belief that any individual can achieve their goals with a little nudge of confidence and encouragement along the way. This Canadian scholarship is dedicated to providing opportunities within the ice making forum for those candidates who are in true need and may not otherwise be able to afford the associated academic costs.

1997- The Ontario Recreation Facilities Association creates the Doug Moore Ambassador Award in his memory, to recognize significant time and energy spent in promoting the association.

1990- Doug’s ice making expertise was featured on CBC’s “Venture” show, when he was contracted by the Florida Suncoast Dome to supervise the offsite exhibition game between the Pittsburgh Penguins and the Los Angeles Kings. This event was attended by 25,581 fans, the largest to ever see an NHL game.

1989- In addition to his involvement with the NHL, Doug’s expertise was also renowned in the Figure Skating World. Doug’s services were in demand to oversee numerous events and television spectacles. His most challenging was the creation of a 360,000 square foot maple leaf on Lake Louise in Alberta, Canada for “Skating Free,” starring Brian Orser.

1989- Doug also worked with John D’Amico on a number of Easter Seals projects.

1988- In his willingness to share information, he saw the creation of the Ice Making Technology course; a course attended by 75-100 students annually at the University of Guelph as part of the Ontario Recreation Facilities Association annual professional development program. This course today still serves as one of three that leads to an NHL recognized Certificate Ice Technician’s professional designation. His chapter in the ORFA “Icemakers Bible” is now in its sixth printing.

1987- Doug was responsible for introducing the “ice report” into the NHL. This report was to be used as an internal tool for the referee to communicate the ice conditions, goal frame/gate concerns to the Building Operations Department after each game.

1986- Doug was instrumental in forming the first association of the National Hockey League Facilities, opening the lines of communication between the League and the Building Operations Departments, to discuss and address improving ice quality in each venue.

1980- He used the ice surface at Maple Leaf Gardens to introduce the concept of large format custom logo stencils for in-ice advertising. Today this vehicle allows small arenas and professional venues to have an important source of revenue.

1979- Doug Moore founded Jet Ice Limited where he continued to experiment with other ice paint products and water treatment systems. Jet Ice would eventually become the official supplier of products to the National Hockey League

1977- While at Maple Leaf Gardens, he developed the technique of purifying municipal tap water for ice making and introduced ice resurfacer additives to improve the ice look and finish. He continued to experiment with ice paints for countless hours to create the right formula specifically designed for reliable use in the ice making industry and sharp enough for television broadcasts.

1961- Doug wrote and recorded “The Leaf Fans Dream” for RCA Victor and donated the entire proceeds to the Ontario Society for Crippled Children.

The theories, practices and ice making concepts developed by Doug Moore are now accepted as standard practice by the industry today. 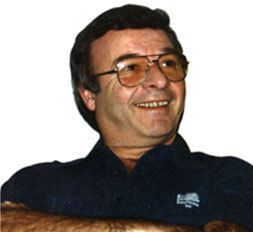