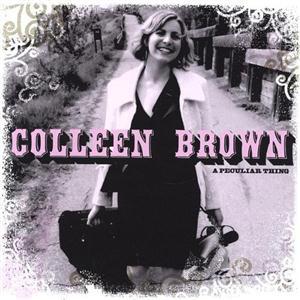 Like all of us, Colleen Brown has a story to tell. Its a good one, too. The difference between her story and most of ours, though, is that she mines her life for music where we roll it around in our heads till it fades or tears. She turns her joy and pain into lyric and melody, into art.

Hers is folk-influenced pop that draws you in with its intimacy, its rolling hills of piano. And she’s not one to fictionalize, so if you’ve crossed her path, that just might be you she’s singing about!

Raised in east central Alberta amid an increasingly complicated backdrop of musical influences - starting with the spiritual, to musical theatre, country pop, and ultimately embracing more humanistic visionaries like Joni Mitchell and Neil Young, plus Gordon Lightfoot and Tori Amos - Brown’s sidebars have had her singing in the R&B Kit Kat Club, while she’s currently fine-tuning her bass-playing in a pop/rock band The Secretaries which includes her frequent live singing partner, Amy van Keeken, and drummer Natasha Fryzuk. This may seem an oceanic leap from her musical family roots – which it is. But Brown’s curiosity has changed the way she approaches songwriting. So while you can tell she covets her moments on CTV nationally at the Governor General’s installation ceremony(where she sang "A Love Song for the Everyman" inches from PMs past and present as well as MPs and Senators) and at the big-name Alberta Scene showcase (including the likes of Ian Tyson, Terri Clark, Corb Lund and Gordie Johnson), she’s excited about where this educational turn is taking her. “Playing bass, I’m already writing songs differently. When I sit down at the piano to write, I might put my hands down in the same place to start. But this is a whole new palette. I listen more to what’s going on in my head. I don’t necessarily know what I’m doing and I like that.”

When it comes down to it, though, what matters is having a song that touches you, which her debut CD A Peculiar Thing does with ease. It’s a personal testimony of sorts, but not an exclusive one. She sums her music up like so: “Bittersweet. I think that’s how life is in general. I’m interested in both sides.”

Colleen is expected to release a second album of original material Summer 2007.