Macgillivray, Troy - When Here Meets There 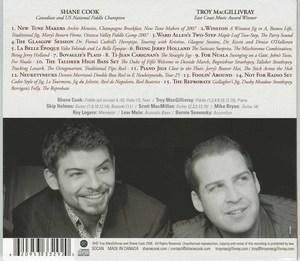 Troy Macgillivray and Shane Cook - When Here Meets There 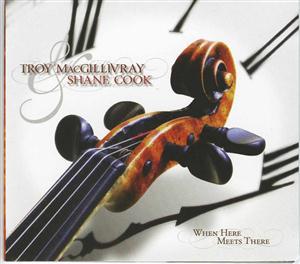 When Here Meets There provides an astonishing breadth of styles, tunes, and arrangements. While each fiddler has several opportunities to shine on solo sets that emphasize his particular strengths, my favourite sets on the album are those that Shane and Troy play together. There’s an obvious excitement and spark between the two players and their ensemble that is infectious. Their combined lift and rhythmic drive propel the music forward.

While each fiddler brings to the album a flavour of his own, the contrast between their playing is nothing but complementary. Perhaps my favourite tune on the album is “Archie Menzies”. After playing the tune through in unison, well-matched in style, tone, variations, and ornaments, and yet not erasing the unique sound of either, each fiddler plays the tune through by himself, each version excellent, and each version very different. There can be no mistake that Troy, gritty and strongly rhythmic, plays the tune through first and Shane, slightly smoother, with unique melodic variations, plays second. This is a wonderful opportunity to hear how two of the top players in their respective traditions shape the tune to make it their own. Shane has a considerable reputation amongst fiddlers for his individual, unique style that is not always predictable, but almost always recognizable for its daring, yet ever tasteful, melodic and rhythmic adventures. Troy demonstrates a similar inclination to flirt with stylistic boundaries, most notably in a number of original tunes included on the album. Some will challenge the listener; all will please.

Although the tunes are obviously very carefully arranged, they still manage to sound fresh and inspired, with a spark and energy that is easiest to capture before they have been endlessly rehearsed. Several of the transitions between tunes, in particular, are quite unusual and grab the listener’s attention. The play with textures, both between the two fiddlers and with the ensemble, is also especially effective. Techniques such as soloing, doubling of the melody by back-up musicians, harmonizing both whole tunes and short phrases here and there, and playing in different octaves all serve to highlight the talents of the individual musicians, as well as create an remarkable listening experience.

In short, this album provides something for everyone – for those who like the old standards and those who like the cutting edge. For those who are familiar with the playing of Shane Cook and Troy MacGillivray as individuals, their collaboration will surprise and delight. When Here Meets There, when Ontario meets Nova Scotia, when Canadian old-time, Cape Breton, French-Canadian, Shetland, Texas and other styles and tunes from a variety of traditions meet on this album, the result is truly magical.

When Here Meets There is an exciting collaboration between two young Canadian fiddlers at the top of their game: award winning Nova Scotia fiddler and piano player, Troy MacGillivray and Canadian and US National Fiddle Champion, Shane Cook. Individually, these two fiddlers are virtuosic musicians and dynamic performers; together, stimulating and feeding off of each other and their top-tier back-up musicians, they are inspirational.

Troy MacGillivray of Lanark, Antigonish County, NS is an accomplished fiddler, pianist and step dancer who has travelled around the world with his talents, including Afghanistan to entertain the troops. With several highly acclaimed CD’s to his credit, his release Live At The Music Room, won him the 2008 East Coast Music Award for Instrumental Recording of the Year. Troy has also appeared as a judge for the highly prestigious Canadian Grand Masters Fiddle Championships and is also a winner of the Danny Kyle Stage at Scotland’s Celtic Connections Festival and the Auleen Theriault Young Tradition Award from the Goderich Celtic Roots Festival—both of which are awarded to an outstanding talent who clearly demonstrates a passion and commitment to traditional and roots based music.

Shane Cook of Dorchester, Ontario is one of Canada’s most highly awarded old-time fiddlers: 3-time Canadian Open Fiddle champion, 3-time Canadian Grand Masters Fiddle Champion, Grand North American Fiddle Champion, and the only Canadian to win the US Grand National Fiddle Championship. Shane is also a cast member of Bowfire, a powerful group of the leading names in each genre of modern string playing with shows that feature the top violinists and fiddlers on the continent.
-Dr. Sherry Johnson, York University, Toronto