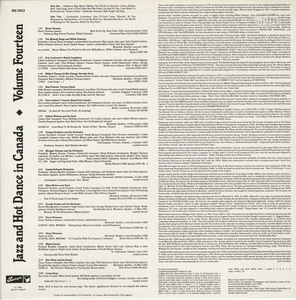 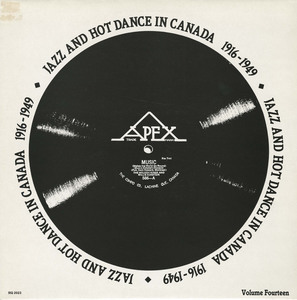 Vol. 14 in a series of reissues released by Harlequin Records during the '80s, each one focusing on a different country or region (including but not limited to Germany, Hungary, San Francisco, Sweden and India).
According to the liner notes, there were black musicians (many of whom were freed or escaped slaves) in Canada as early as 1775. Towards the end of the 19th century some, including Nathaniel Dett, began writing and performing ragtime music, which over time (this is a gross over-simplification) mutated into what became known as swing and jazz. These styles spread in popularity across the globe and were played by musicians of all races and nationalities, and Canada was no exception to this cross-pollination.

A1: Harry Thomas - Delirious Rag (1916)
Pianist Harry Thomas was born in England but moved to Montreal, where he became a protégé of Willie Eckstein (one of Canada's most popular musicians at the time) and developed a gift for improvisation honed by endless hours spent accompanying silent movies, despite his inability to read music. The Canadian Jazz Discography describes him as Canada's first real jazz musician. "Delirious Rag," a frenetic solo piece for piano, was written by Eckstein and Thomas and was recorded in New York in 1916.
Harry Thomas, piano) / Harry Thomas, Willie Eckstein

A2: The Melody Kings And Willie Eckstein - Music (Makes The World Go Round) (1922)
Banjo player Andy Tipaldi formed The Melody Kings in Montreal in 1921, and they played that city's best dance clubs until 1928. They also recorded a number of sides, including this jaunty 1922 tune co-written by Eckstein, Billy Munro and Sam Howard. Apparently The Melody Kings were considered a "hot dance" group, rather than a jazz band. If you're wondering what the difference is, Eckstein's entry in The Virtual Gramophone (which is an *amazing* resource) describes it thusly; "Hot dance music, usually played by bands that had piano, saxophone, and cornet or trombone, was then thought of as jazz; but in fact several characteristics distinguished it -- and Eckstein's piano style -- from true jazz. These included arranged solos and a more restrained swing rhythm." At the time of this recording, the group's lineup was Johnny Dixon (trumpet), Alex Lajoie (alto sax), Tipaldi (banjo), Eckstein (piano), Tipaldi's brother John (violin) and Rob Roy (drums), with unidentified tuba and trombone players rounding out the ensemble. Apparently, this side was recorded the night after a long party, and the group members were allowed to improvise a bit; Eckstein's dexterous runs on the piano absolutely own the track.
Willie Eckstein, piano ; Andy Tipaldi, banjo, leader ; unidentified, tuba ; Rob Roy, drums) / Billy Munro, Willie Eckstein, Sam Howard.

B8: Lorna Dean - Pallet On The Floor (1949)
It doesn't appear as though much is known about singer Lorna Dean, which is a shame because I love her gorgeously melancholic 1949 rendition of the folk standard "Pallet On The Floor". The liner notes do state that this band - led by Lorna's husband Dean (cornet), with Bill Hicks (guitar) and Michael Snow (yes, that Michael Snow) (piano) - was one of a few amateur outfits which played dances in and around Toronto during a late '40s revival of traditional New Orleans jazz; this record was sold to fans at their gigs.
Lorna Dean, vocal ; Ken Dean, cornet ; Mike Snow, piano ; Bill Hicks, guitar) / unknown composer.