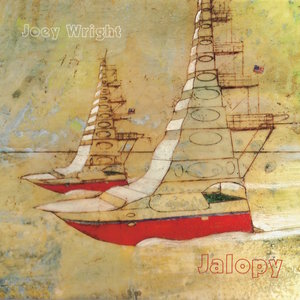 Ask Joey Wright to describe the music on his new album Jalopy, and he'll tell you "cinematic quasi bluegrass jazz compositions". That description is hard to argue with. The follow up to 2003’s “Camp” Joey’s Black Hen Music debut is indeed a collection of gorgeous acoustic instrumentals that draw on bluegrass, jazz, blues and world music to create something beautifully unique yet wonderfully familiar. A warm and captivating ambience that closes your eyes as you breathe a little more deeply.

Somewhere between the 150 dates a year Joey plays as the guitar/mandolin player with Sarah Harmer and the now legendary Toronto bluegrass ensemble, “Crazy Strings” and co-writing and playing songs with his Juno Award winning wife Jenny Whiteley, Joey found the time to write a plethora of music for his new album. This one, he decided, was going to be all instrumental, and he picked 12 of his favorites for the project. He also chose the material based on knowing the playing of the band he had envisioned. The Elphin Ontario and sometimes Toronto resident knew exactly who he wanted and he gathered an elite group of musicians from across Canada. He started with the one-two punch of Steve Dawson (Weisenborn, resonator guitar and ukulele) and Jesse Zubot (fiddle, fiddle and fiddle), imported from the left coast. He then included the locally homegrown organic gourmet ingredients of Dan Whiteley on the mandolin and added all of this to the perfect base, the bass, of Joe Phillips. In the role of chef and concert master, Joey played guitar, slide resonator guitar, mandolin, slide resonator mandolin and tenor banjo.

The album starts with the catchy, and extremely humable title track; a banjo-infused poke at the bluegrass tradition. Next is the record’s only cover tune, the famous “Come Sunday” like you've never heard it before, think less jazz club and more luau. From there, Wright takes you on a journey through the Appalachian mountains, to the Victorian parlour room and even to the ball, all in the back of a Gypsy wagon. The magic of the mix and blend of the fine musicians gathered around microphones to capture the essence of Joey's writing, is what gives Jalopy its thread and its unity. Jalopy might just save the world, one note at a time.

Besides accompanying Sarah Harmer and Jenny Whiteley both on record and live and playing in his bluegrass band Joey has appeared as a studio musician on recordings by Amy Millan, Oh Susanna, Pierre Schryer, The Banjo Special, Ron Hynes and John Southworth to name a few as well as composing for television and film. Joey is also dad and a husband and lives in small town southern Ontario and as a long-time member of the Toronto bluegrass mafia, he is helping to define a new era of roots music in this country, and beyond.