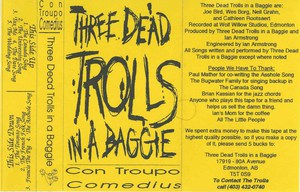 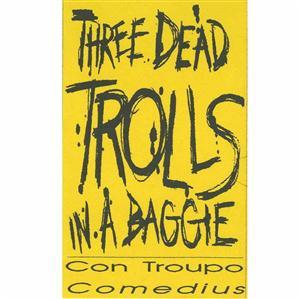 The Canada Song
Written by Three Dead Trolls in a Baggie

Between the ice caps of the north pole,
and the states of America,
there is a country in the middle that is known as Canada
Where the natives are all happy,
and the lakes are fresh and clean,
there is no unemployment,
and no one is mean.

In the summer there's no mosquitos,
and the winters are never cold.
There is no clear-cut logging,
and no ozone hole.

Oh Canada, your leaders are so swell.
In Canada, no one ever goes to Hell.

No criminals or taxes, and Visa never phones.
Elvis is alive in Moosejaw, but we leave him alone (thankyouverymuch)

'cause we're in Canada, whose army is so strong.
In Canada, no one has to mow their lawn!

So shout Canada (Canada!)
The courts are always fair.

So shout Canada (Canada!)
Whose mechanics never ever swear
(Oh, I put my finger on the darned manifold, ooh, that's hot!)

The rednecks and the hippies live in perfect harmony,
growing wheat and marijuana together, hydroponically.
Nobody has pimples, and the skies are all so clear,
and when Jesus Christ comes back to Earth,
I know he'll be born here.

The phone line's never busy, and you're never put on hold,
Canada's a country carved entirely from gold.

Oh in Canada, everyone says please.
In Canada, no one ever cuts the cheese.

Oh Canada, Oh Canadaaaa
The country of love is the country for me
Canada...
starts with a "C".

The Toronto Song
Written by Three Dead Trolls in a Baggie

I hate the SkyDome and the CN Tower too;
I hate Nathan Philips Square and the Ontario Zoo!
The rent's too high,
The air's unclean,
The beaches are dirty,
And the people are mean!
And the women are big and the men are dumb
And the children are loopy 'cause they live in a slum!
The water is polluted and the mayor's a dork!
They dress real bad and they think they're New York...
In Toronto . . . !
Ontario . . . oh-oh!

I took a trip to Ontario to visit Brian Mulroney!
He beat me up and he stole my pants
And he put me in a tree!
I went to see the Maple Leafs
And got hit in the head with a puck.

"Come to think of it, I pretty much hate every gosh darn province and territory in our country!"
"Well except Alberta!"
"Oh yeah, of course I love Alberta! Lot's of cows, rocks, trees and dirt . . . mmmmoo moo moo!"

But . . . I hate Newfoundland 'cause they talk so weird
And Prince Edward Island is . . . too small.
Nova Scotia's dumb 'cause it's the name of a bank;
New Brunswick doesn't have a good mall!
Québec is revolting and it makes me mad!
Ontario sucks . . . Ontario sucks.

Saskatchewan is boring and the people are old!
And as for the territories . . .
They're too cold!

"And the only really good thing about the province of British Columbia is that it's right next to us!"
'Cause Alberta . . . a-a
Doesn't suck!
But Calgary does . . . !