Three Dead Trolls in a Baggie

The original Trolls - Borg, Bird, Neil Grahn and Cathleen Rootsaert - allegedly met when at least some of them worked at the same restaurant; the name "Three Dead Trolls in a Baggie" comes from a nickname the staff used for a triple hamburger to go. The troupe formed in 1987 and quickly came to national attention as perhaps the most popular performers on the Canadian Fringe Festival circuit in the late 1980s and early 1990s. The Trolls initially did sketch comedy, often on risquÃ© or controversial subjects, along with humorous songs. One of their most famous songs, "The Toronto Song", which makes fun of Canada's regional rivalries by insulting the city of Toronto and eventually most of the rest of the country as well, originates from this period. Today this song is often mistakenly attributed to The Arrogant Worms, despite the fact that the Worms are themselves from Ontario while the song makes it clear that its writers are from Alberta (but not Calgary).

By 1991 the Trolls were touring with a full-blown play entitled "Kevin Costner's Naked Butt" (the play did not in fact even mention Costner, but Bird did have a brief nude scene). Another play the following year, "Saskatchebuzz", featured Saskatchewan declaring independence from the rest of Canada and quickly becoming the world's leading producer of marijuana; beneath the show's surface humour lay commentary on such subjects as drug legalization, and the effects of farm subsidies and the Québec sovereignty movement. This show garnered the group's most consistently positive reviews to date. At about the same time, a cassette-only album of the Trolls' songs, Con Troupo Comedius, appeared, featuring "The Toronto Song" among others (and settling the issue of the song's title, which fans and reviewers often rendered as "The Ontario Song" or "Ontario Sucks"). Some of this material is now more easily available on the CD Steaming Pile of Skit.

Shortly after this, the group briefly had a television show on the CBC, but this received mixed reviews and only lasted five episodes. Much of the group's material at the time was far too raunchy for national prime-time broadcast, and new material most reviewers considered mediocre at best was added in its place. It is sometimes remarked that opening the first episode with "The Toronto Song" may have contributed to this short lifespan, as key CBC offices are located there; though commonly made in jest, an open letter to the Toronto Star by Borg, Bird and Grahn made the same charge in apparent seriousness.

Shortly after the failure of the television show, Grahn and Rootsaert both left the group; both have since turned up on the CBC in other capacities from time to time and Rootsaert, at least, has intermittently worked with the Trolls since ceasing to be a full-time member.

At least as far as live performances outside Edmonton went, the Trolls were quiet for a few years, then spent the rest of the 1990s collaborating with other Edmonton comedians, since the remaining duo could not by themselves stage the sorts of shows they had become accustomed to. The resulting shows were generally well-received with perhaps the most popular at the time being "Piledriver", another play which underlay a humorous narrative with commentary on serious issues, a collaboration with Guys in Disguise.

However, it was their collaborations with Atomic Improv which would have the most lasting effect on the Trolls. This involved the Trolls extensively experimenting with improv, something they had rarely attempted in the past. Another trend which started in this period was a decreased emphasis on the more "adult" aspects of previous shows like "Piledriver" and "Kevin Costner's Naked Butt"; more recent Troll humour is much less likely to be about sex or drugs or feature extensive use of profanity compared to their earlier material. In addition, the (scripted) play "The War of 1812", a humorous retelling of the war of the same name replete with deliberately over-the-top pro-Canadian jingoism, featured perhaps their most famous song to date, "The White House Burned (The War of 1812)". This is yet another Trolls song that is often mistakenly attributed to the Arrogant Worms. Perhaps the most important result of this collaboration, however, was Paul Mather's decision to join the Trolls as their first new full-time member since the original lineup. (Mather continues to be a member of Atomic Improv as well.)

Since about the same time Mather joined full-time, the group has focused on releasing CDs of their skits and songs, chiefly over the Internet rather than through traditional music stores. Perhaps their most well-known skit today is "Welcome To The Internet Helpdesk" from the album Skit Happens, which portrays a computer technical support employee struggling to help a computer-illiterate customer over the telephone. They still perform regularly in Edmonton but have not toured nationally, on the Fringe circuit or otherwise, for several years. Until mp3.com was closed, Trolls CDs were popular items at that site, which also featured free downloads of much of this material; at one point the Trolls had four of the sites top 10 selling comedy CDs. Much of the free material can now be found on the Trolls' own web site. 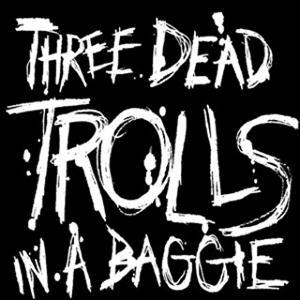 Three Dead Trolls in a Baggie