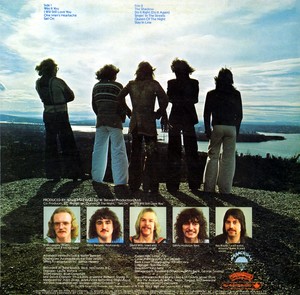 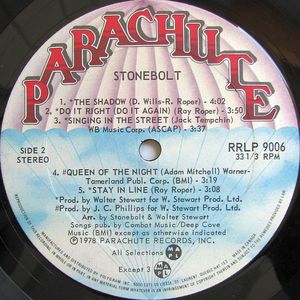 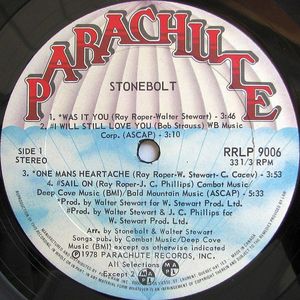 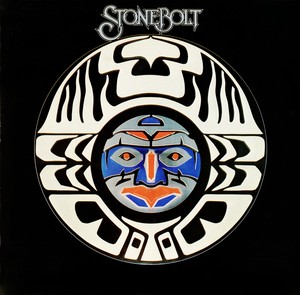 In 1969 guitar player Ray Roper, drummer Brian Lousley and bass player Dan Atchison were high school students. They decided to form a band named Perth Amboy, possibly after the city in New Jersey. (In 1968 a band from Michigan called the Amboy Dukes had a Top 20 hit titled “Journey To The Center Of Your Mind”). Roper was from England. Perth Amboy played at high school dances and many small venues in the Lower Mainland. In 1973 they changed their name to Stonebolt, after adding John Webster on keyboards and David Willis on vocals. Willis left the Seattle band, Shaker, to join Stonebolt.

Stonebolt got their renown by playing all the bars in the local Vancouver area circuit. They recorded some demos in 1976 and the following year got noticed by Johnny Rivers’ road manager, Walter Stewart. He got Stonebolt connected to Parachute Records resulting in a contract. In 1978, their self-titled album brought forth several releases. “Queen Of The Night” peaked at #24 on CFUN in May of ’78. Their next release, “I Will Still Love You”, became an international hit, peaking at #29 on the Billboard Hot 100, and #7 in Vancouver. Their third release from their debut album was “Was It You.”

“Was It You” is a song about someone who is at loose ends. A relationship has ended leaving the singer in pain with the sense that “nothing seems real.” Looking back, the singer recognizes they “fell too fast.” It seems they also chose to leave the relationship, as their partner told them, “don’t leave me, baby.” “Was It You” only seems to have charted in Vancouver where it climbed to #18. Other radio stations played the A-side, “Love Struck”.

In 1979 the band released their second album, Keep It Alive. A single release, “Love Struck”, climbed to #70 on the Billboard Hot 100 in late February ’79. The B-side of “Love Struck” was “Was It You”. Another single from the album, “Don’t You Hide It”, peaked at #6 on Vancouver’s CKLG singles chart in February 1980. A third album, New Set Of Changes, was released in 1980. However, it failed to sell well as single releases from the album got limited airplay. “Crying Again Tonight” climbed to #15 on CKCK in Regina, but got little notice elsewhere.

In 1981 John Webster left Stonebolt and was replaced by keyboard player and composer Lewis Nitikman (who had earlier attended Prince Of Wales Mini School in Vancouver, and later went on to perform with recording artist John Reilly ). In 1982 Stonebolt released Juvenille American Princess. The single, “Going Through The Motions Of Love”, earned Stonebolt a SOCAN award for massive Canadian airplay. However, the song didn’t crack the RPM Canadian singles chart. The band broke up in 1983.

In 1984 John Webster joined Red Rider with Tom Cochrane. In addition, he also was a Vancouver-based studio musician who featured on recordings by Aerosmith, AC/DC, Jann Arden, Bif Naked, Bon Jovi, Michael Bublé, Cher, Tom Cochrane, Alice Cooper, The Cult, Grapes Of Wrath, Kim Mitchell, Van Morrison, Mötley Crüe, The Paperboys, Poison, David Lee Roth, Rush, Scorpions, Tragically Hip, Van Halen and the West End Girls. From his work as a recording artist and studio musician Webster has earned three Juno Awards. The first was with Red Rider in 1986 for “Best Group.” In 1997 Webster produced The Paperboys album Molinos. In 1998, along with the Paperboys he won a Juno for “Roots Traditional.” In 2002, after producing an album for Kevin Parent, along with Parent he won a Juno for “Best Francophone Album.” Webster has also composed for the 2005 TV film Rapid Fire, based on the Norco, California, shootout in 1980. And in 2006, John Webster composed a score for the disaster film, Absolute Zero, about a polar shift. In 2016, Webster went on tour to Europe, Asia and South America, performing with R.S.O. (Richie Sambora/Orianthi).

After Stonebolt folded in 1983 Ray Roper went on to form Trauma with Trooper alumni bassist Doni Underhill and drummer Tommy Stewart. Next, in the mid-80’s he former the Ray Roper Band. By the late ’80’s Ray Roper was in a band called The Edge. In 1995 Roper released the album, I’m A Fighter. As recently as 2015 Ray Roper was appearing Sundays at the Haney Pub, and in Barracuda – Essential Tribute to Heart.

There was new interest in classic rock by the late ’90’s, and Stonebolt reformed in 1998. In 1999 Stonebolt released a “best of” album titled Regeneration. In 2010 the title track from Stonebolt’s 1980 album, New Set Of Changes, was included in the soundtrack for the Canadian drama film Amazon Falls. Stonebolt has continued to perform periodically for the past two decades. Stonebolt played in concert at the Coho Festival in Ambleside Park in West Vancouver on September 9, 2018.
-Ray McGinnis, May 1, 2019