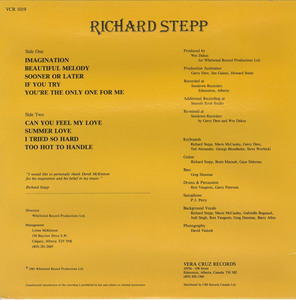 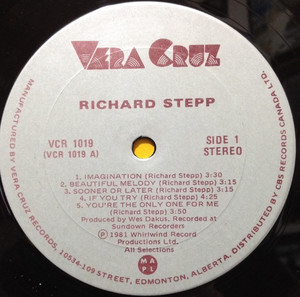 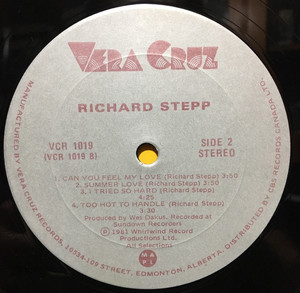 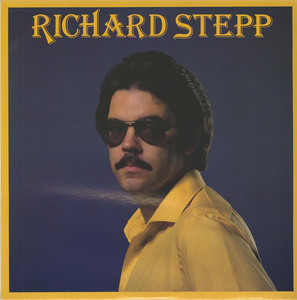 "Richard Stepp" is the title of Richard's second LP. It was recorded in Edmonton, Alberta at Wes Dakus' Sundown Studios, and at Smooth Rock Studios in Calgary, Alberta, Canada. Along with Wes, the sessions were produced by Jim Gaines and Howard Steele. Some noted Canadian musicians played on the album, including The Guess Who's Garry Peterson on drums, sax ace P.J. Perry, guitarists Gaye Delorme and Brent McNab, and keyboard wiz Mavis McAullie (among others). The music covers a range of styles under a pop/AOR umbrella. The opening number Imagination still gets airplay in Canada, more than 20 years after it's release. To balance the softer tunes, there is the rocker Can You Feel My Love, the bluesy Tried So Hard, and the boogie-woogie piano workout on the album closing Too Hot To Handle. Other highlights include If You Try, Sooner Or Later, and Beautiful Melody.

I put together The Richard Stepp band in 1981 so I could go on the road and support my just released second LP ("Richard Stepp"). The group consisted of Nick Doctor on drums, Mike Kasper on bass, and myself on guitar, piano and lead vocals (pictured above). Sometimes Mike Hanford or Peter Sweetzer would play the keyboards. Lead guitarists have included Jim Grant and Ray O'Toole. We gigged a lot in Alberta and British Columbia, playing clubs mostly, but also a concert or two. The group broke up in the spring of 1982.