Hi, I'm Richard Stepp. Most people know me as a singer, songwriter and pianist. I feel at home in several musical settings, including, pop, country, rock'n'roll, blues, boogie-woogie, ballads, and standards. I was inspired by Elvis Presley and Jerry Lee Lewis, and took up guitar with a burning desire to be a rock 'n' roll singer. I was very lucky to have my Aunt Vera Finlayson teach me honky-tonk piano, Sicamous style. I studied the records of my favorites: Jerry Lee Lewis, Fats Domino, Jimmy Johnston, and Professor Longhair, and learned their styles of playing. Singers I liked were Elvis, Jerry Lee Lewis, Dean Martin, George Jones, and Hank Williams, to name but a few.

I started writing songs soon after joining The NW Co in 1967. After the lead vocalist left, all four remaining members shared the lead vocal duties, resulting in a burst of songwriting from everyone. I have developed my songwriting to include most, if not all of the previously mentioned styles of music, and have to date written around 400 songs. I have at least a rough demo of most of them.

During my stint in Home Cooking I had made the switch to guitar, giving me the opportunity to take center stage to sing my songs. Some of my guitar heroes are Chuck Berry, John Lee Hooker, Neil Young, Lightning Hopkins, Jimi Hendrix, Chet Atkins, Robert Johnson and Vancouver guitarist Danny Tripper. By the time my first LP Holiday In Hollywood was released in 1979 I had more or less made the move to piano as my primary performing instrument.

With modern technology being what it is, it has brought the price of high quality recording down to a level where musicians like myself can afford more recording time. This has allowed me to get my songs recorded, and released to the world on my own terms. With more and more pieces falling together I am now able to work with just a few trusted people and together we can reach the whole world!

Stepp On A Steinway

It Only Takes One

Holiday In Hollywood b/w If I Could Write a Song

Hold On b/w Hold On

Holiday In Hollywood b/w Good To Have You

Caught Up in a Whirlwind b/w When We Meet Again

Chasing a Dream b/w You on My Mind 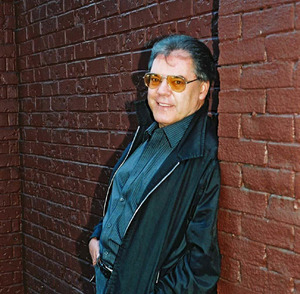