Stagger, Leeroy - Everything is Real 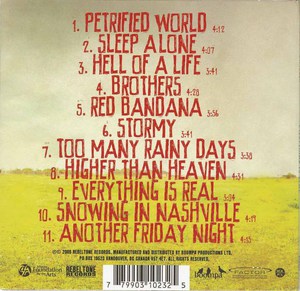 Leeroy Stagger - Everything is Real 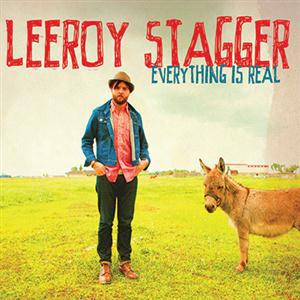 Everything Is Real is a beautiful documentation of the young troubadour finding his voice and putting himself back on track as one of the most promising new Canadian artists to join the ranks of Blue Rodeo and Kathleen Edwards.

“A blue-collar roadhouse sound that borrows as much from Farrar-Tweedy as Springsteen. Stagger’s grit and gloom are on par with the influences.” - Harp Magazine

The title track is rollicking 3 minute classic reminiscent of early 70’s New York punk while the beautifully imaginative “Red Bandana” evokes the poetry of Lucinda Williams’ “Essence” record. It’s where Stagger finds his voice and really starts his career off.

In 2004, Victoria Canada had been thrown into the spotlight due to the success of garden city hipsters HOT HOT HEAT. Right in the midst of that was Leeroy Stagger, who had HHH's seal of approval as touring support for the band and musical contemporary early on. "I wasn't ready and nothing really came about for me throughout that time period" recalls Stagger, but he did manage to release the critically acclaimed "Dear Love" album, a “Whiskeytown-esque” tinged alt- country rock gem produced by Victoria's own Tolan Mcneil, (Neko Case, Carolyn Mark) and attract the attention of Vancouver Independent label "Boompa Records". In 2006, Boompa released Stagger’s "Beautiful House" album, produced by Canadian musical treasure "Danny Michel". The single "Just in Case" was featured in two episodes of ABC’s acclaimed series “Grey’s Anatomy”, as well as a multitude of other television shows and films.

In 2007, Boompa released Stagger’s first “coming of age and voice” record "Depression River". The album showcased a more matured songwriting talent and confident voice. The record was followed up with a 2-month U.S. tour, as well as a handful of U.K. and European dates.

In 2008, halfway through recording his follow up to “Depression River”, Stagger’s life changed dramatically. He found sobriety. "It was like a huge weight had been lifted off of me, it was either booze or my career and I think I made the right choice", and it showed in the recording process. His songs had evolved, and came from a purer, clearer perspective. Stagger enlisted “Depression River” producer John Ellis to man the helm for the project, as well as drummer Pat Steward (Brian Adams, The Odds), bassist Tyson Maiko and guitar player Kevin Kane (Grapes of Wrath). Entrenched in Ellis' studio in the small town of Ashcroft B.C., the result had been 2 years in the making. The beautifully crafted, " Everything is Real" record is an eleven-song masterpiece of music from the heart and soul of the young troubadour. In addition to Stagger’s core band, the record features musical guests Bobby Furgo (Leonard Cohen Band), Tim Easton (New West Records) Evan Phillips (The Whipsaws) and Neal Casal (Ryan Adams and the Cardinals). The title track is rollicking 3-minute classic, reminiscent of early 70's New York punk rock, while the stunningly imaginative "Red Bandanna" evokes the poetry of early Lucinda Williams’s material.
Stagger is also a member of the folk trio Easton,Stagger,Phillips, with acclaimed American songwriters Tim Easton and Evan Phillips, The trio will release there first full length "One for the Ditch" this summer on Stagger’s newly formed "REBELTONE RECORDS."

With a performing history opening shows for the likes of The Pixies, Ron Sexsmith, Tegan and Sara, Kathleen Edwards, George Thorogood, Joel Plaskett, The Drive by Truckers and Jason Isbell just to name a few, Stagger is no stranger to the stage. Thriving on live performance, he is truly happy when he is on the road playing and connecting personally with his loyal fans

Stagger now resides on the prairies of Canada in Lethbridge, Alberta.