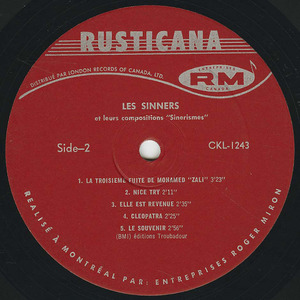 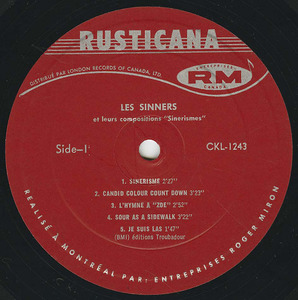 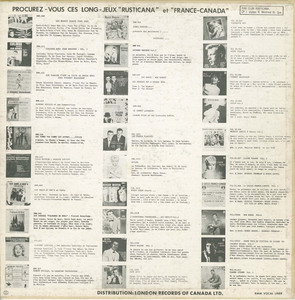 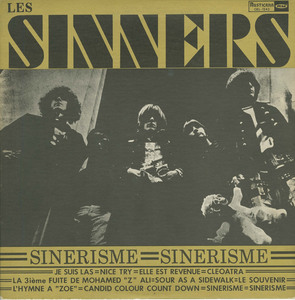 Les Sinners were a garage rock group who formed in the summer of 1965 in the Outremont neighborhood of Montreal, Quebec. They were one of the very first French-speaking garage groups in Quebec. The very first concert of the group took place at l'école Querbes, in a gymnasium which organized dances on Saturday evenings.

Their first album, Sinerisme, was published in 1967 by Rusticana. However, they became popular thanks to their cover of the first Beatles song Penny Lane and were broadcast on the radio. Penny Lane was released as a single and was followed by the band's first official studio album, Sinnerismes, released on Jupiter, distributed by London Records. This opus was a real success.

In 1968, the group published their third studio album, Vox populi, which is considered one of the most important works of Quebec rock of the 1960's. That same year, they were again noticed with three songs: Go Go Trudeau, Les Hippies du quartier, and La ballade du bûcheron, an alternative title for Serge Deyglun’s Return from the Workyards.

Between 1968 and 1970, Les Sinners adopted the name La Révolution française, after seing L'Osstidcho and talking to Robert Charlebois : because Rock & Roll could be done ''en Français!" and released the albums C.Cool (1968) and Québécois (1969). They take the name of the Sinners and publish in 1971 the homonymous album, Sinners on the Trans World label. The group ended its activities in 1976.

In 2016, Charles Prévost-Linton announced the release of his book This voice that lives in us, published by Marcel Broquet.

Re-issued and remastered on CD in Japan on Oldays Records in 2018.