Rock Plaza Central - Are We Not Horses? 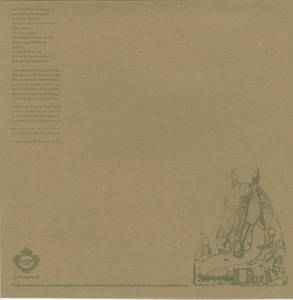 Rock Plaza Central--Are We Not Horses BACK 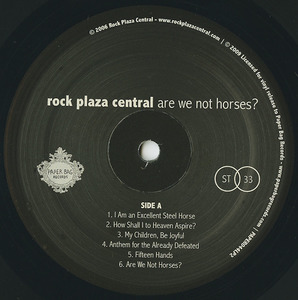 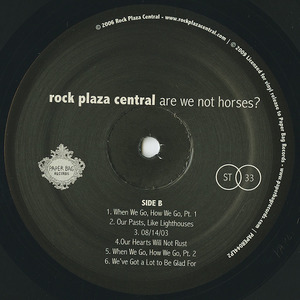 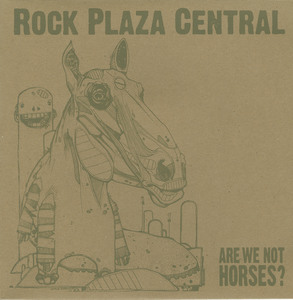 Are We Not Horses?

This would have been the perfect opportunity for a concept review. The situation almost demands it. Toronto-based Rock Plaza Central's Are We Not Horses? is after all a concept album, a song cycle about mechanical horses programmed to think they're real horses, the implication being that their artificial minds and souls still act like real ones. And they're caught in the middle of an epic war between good and evil. And their story is conveyed in Chris Eaton's high-flying wail of a voice, an odd instrument that would be completely off-putting if it weren't so touching in its derangement. All those elements just beg for a review that's equally far-fetched and out-there, something weird and coolly obtuse.

But for an unsigned band that most readers will not have heard prior to reading this piece, I fear that approach would be useless, more a showcase for the critic's questionable indulgences than an engaged assessment of an album that should find a wide audience in the indie realm. Even worse, such a concept review might give the wrong impression of not just Are We Not Horses?, but of Rock Plaza Central itself, a loose collective of Toronto musicians that sculpts epic indie-folk curios from Eaton's odd and oddly affecting lyrics. The horse thing is a crucial but not defining part of this beguiling, often beautiful album, so concentrating too much on that part of it threatens to paint these songs as cartoonish and detached from the world they want to portray-- especially considering all the annoying indie acts dressed up like stuffed animals these days.

In truth, even after abandoning the concept review idea, I feel the burden of responsibility to describe for you music that often seems just beyond the reach of verbs and adjectives-- Fiona Stewart's swirling violin running tangent to the melodies; those demonstrative horns volleying fanfares across Eaton's vocals; the unsettling unraveling of "My Children, Be Joyful" and closer "We've Got a Lot to Be Glad For"; the way songs bend themselves into a heraldic sing-alongs, as if Eaton is leading a congregation in hymns. His vocals and the band's liberal application of brass instruments have inspired many comparisons to Neutral Milk Hotel, but in truth, Are We Not Horses? recalls Okkervil River's similarly hoofed Black Sheep Boy in the metaphoric potential of its anthropomorphism as well as in its considerable musical accomplishment.

And yet, Are We Not Horses? is an idiosyncratic work, marked by the musicians' individual and collective personalities. A different musical idea illuminates each song: On the tense "Fifteen Hands", the rattling percussion mimics the horses' snorts and whinnies, as if tethered around a dimming campfire, tendrils of steam forming in the cold air around their hot skin. Coming out of nowhere, children's voices chant "Go, go, go, go, go!" on "When We Go, How We Go (Part II)", their voices pushing the tempo and adding a new element to the mix. The smaller moments also resonate: The and-beat piano chords on "When We Go, How We Go (Part I), the Tom Waits rattle of "Anthem for the Already Defeated", the desperate funeral march of "Our Pasts, Like Lighthouses" that rises into a genuinely moving finale. Even "08/14/03", less than a minute long and with only a few lyrics, is sweet in its brevity.

Ultimately, the horses could be just a distraction; humanity is Rock Plaza Central's chief concern, and accordingly, Are We Not Horses? is full of humor and violence, joy and sex, dignity and death. As much as the album is a group effort, much of the credit belongs to Eaton, who turns his vocal mannerisms into strengths and manages to sound poignantly unguarded. It shouldn't surprise listeners or readers that he is also a novelist, with two books out on Insomniac Press. Similarly, Are We Not Horses? has a novel's sweep, with an implied narrative arc that begins with "I Am an Excellent Steel Horse", with its introductory lyrics and heraldic horns, and ends with the valedictory "We've Got a Lot to Be Glad For", which gradually fades out as if taking that long ride into the sunset. Because the music is so surefooted and evocative-- and Eaton's potentially alienating horse motif is handled with empathy and imagination*-- Are We Not Horses?* remains accessible, supremely affecting, and unique.
-Stephen M. Deusner, Pitchfork

On Are We Not Horses Toronto-based, seven piece indie-folk ensemble Rock Plaza Central uses traditional instrumentation to sketch visions of an apocalyptic future where angels battle humans and a race of robotic horses falls into existential crisis. Guitar, violin, banjo, drums, bass and horns combine to bring to mind the psych-folk of Neutral Milk Hotel as well as the casual country-soul of The Band. Culled from the oral short stories of guitarist and novelist Chris Eaton, Are We Not Horses is surefooted in its unique, evocative approach, riding soundly on the back of Eaton's frighteningly emotive vocals and the band's spare-but-hummable melodies. This groundbreaking sci-folk song cycle speaks directly to the questions of essence and existence, but with a back-porch simplicity that leaves us all chanting the band's warm, comforting mantra... "We've Got a Lot to Be Glad For."